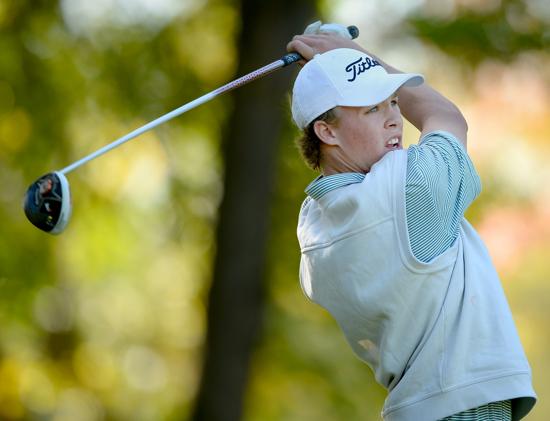 Although he erased a six-shot deficit over the final 36 holes, the Northbrook resident ultimately took second place after losing to Naperville’s Raymond Knoll in a four-hole playoff at Cantigny Golf on July 17.

“It still stings like a loss,” Hardy said of the close call.

But Hardy, an Illinois freshman-to-be, bounced back from last week’s disappointment by finishing first atMonday’s 36-hole U.S. Amateur qualifier at Onwentsia Club in Lake Forest. He carded 67-68 for a 7-under 135 at the par-71 track. The top three in the field advanced.

“Sometimes you win, sometimes you don’t,” said Brett Packee, Hardy’s golf coach since elementary school. “I think what happened at the state amateur will push him to bigger and better things.”

Hardy is back at the U.S. Amateur, the country’s most prestigious amateur event, for the second year in a row. A year ago, he led the 312-player field after 18 holes and was one of 64 players to advance to match play. This year’s tournament will be played at the Atlanta Athletic Club in Johns Creek, Georgia, a suburb of Atlanta, from Aug. 11-17.

Hardy also will be playing against some of the world’s best amateurs next week at the Western Amateur at Chicago’s Beverly Country Club. He earned his way there by tying for second place at the Western Junior at Flossmoor Country Club in June.

Jack Watson may have had his best summer in 2012.

That’s when the Lincolnshire native and Carmel grad played in both the U.S. Amateur and Western Amateur, two the world’s best amateur golf tournaments.

But Packee said Watson, who will be a fifth-year senior at Wisconsin, is a better all-around player now than he was in 2012. Watson tied for fifth at the Illinois State Amateur last week, qualified for the U.S. Amateur on Monday and is in the field at next week’s Western Amateur.

“Jack is firing on all cylinders,” said Packee, who teaches and sometimes caddies for Watson. “He’s hitting it farther and is putting outstanding. But his biggest improvement is that he’s much more mature. The growth on that end has been tremendous.”

Watson was in the hunt at the State Amateur at Cantigny until a third-round 74 stunted his title effort. But Watson closed with a 69, tied for the best score of the final round.

“Two years ago, that 74 would have led to another 74 or worse,” Packee said. “Instead, he shook it off and shot better. That’s great to see.

“Jack can play with any of the amateurs out there.”

Watson said he once was his own worst enemy on the golf course. At last year’s State Amateur, Watson was 8 under and leading after three rounds before shooting 76 in the final round to tie for second.

“I’ve learned from some bad experiences,” he said. “You can’t give shots back from mental mistakes. If I want to go that next level, I can’t do that.

“I’m much better about that this year.”

Eight players in the Pioneer Press coverage area earned exemptions into next year’s State Amateur by finishing 20th or better at Cantigny, including Northbrook’s Nick Hardy and Watson.

Highwood’s Patrick Flavin was not too thrilled about the consolation prize after last week’s final 36 holes. The Miami (Ohio)-bound player went from 71 to 72 to 75 to 78 to place 18th alone.

“I lost it,” said Flavin, who’s good friends with Hardy. “I played poorly at the end.”

Deer Park’s Chadd Slutzky led going into the final day, but the 37-year-old stumbled to a 71-75 to finish in fourth. He was looking to become the first non-college player to win the tournament since 2004.

“I was fine in the morning round, but sitting down and having a big lunch didn’t help,” Slutzky said of the break between the 36-hole marathon. “In the afternoon round, my mind was telling me to do something but my body wasn’t responding. I’m used to using a cart and playing once a week.”

Between taking a finance class at Northwestern and caddying at Bob O’ Link in Highland Park, New Trier graduate Fitz Bowen said he hasn’t had much time to practice or play golf.

But the Kenilworth resident has made the most of his opportunities. Last week, Bowen tied for 23rd at the state amateur at Cantigny Golf after rounds of 78-72-75-73 for a 10-over 298. On Monday, he shot 74-75 at Onwentsia Club to tie for 12th at the U.S. Amateur qualifier.

“I’m going a million miles an hour this summer,” said Bowen, a sophomore-to-be at Middlebury. “I haven’t put too much time into my game, and I am not taking any lessons. When I go and play, I have to pick things in my swing, little things, that help me hit the ball close to the hole.”

Bowen had a freshman year to remember at Middlebury. He won the NESCAC championship and helped his team to the conference title. Bowen said his game is as good as it’s ever been, and he realized Monday that he can compete with the country’s top golfers when he played with Jim Liu. A sophomore-to-be at Stanford, Liu finished fifth and is the second alternate out of the Onwentsia qualifier.

“I’m not that far off,” Bowen said. “I have a tiny window to see how everything pans out in golf, and I am considering coming home next summer and doing something other than caddying so I can play more golf.”

Charles Waddell joined Hardy and Watson in the U.S. Amateur field thanks to a strong showing Monday at Onwentsia. The Wilmette resident shot 67-70 to finish 5 under and in second place. The highlight of his day was an eagle at the par-5 first hole during the first round.

— Rick Armstrong contributed to this report