Inside the weight room at Lake Forest High School 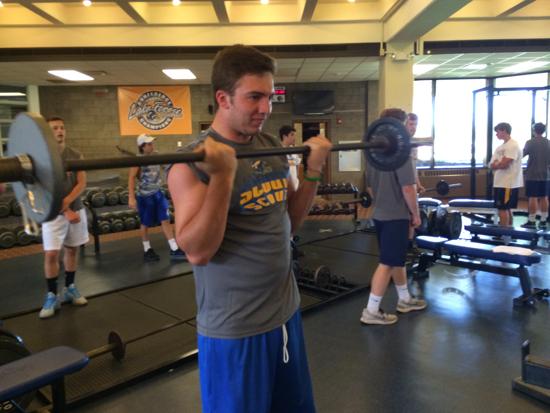 The multi-purpose turf facility, along with a remodeled weight room, became the home base for the Scouts football program. The field is shared with the field hockey and both boys and girls soccer and lacrosse teams. And it’s not just football players who use the full-scale weight room, featuring 17 power racks and four lifting platforms.

“Our strength and conditioning program is open to all the kids,” Lake Forest athletic director Tim Burkhalter said. “A ton of football players jump in on it, but it’s for every sport. We have a lot of teams whose home base is west campus.”

Boys lacrosse coach Dan Maigler has his players lift weights during the spring season. If a team from another sport is using Varsity Field to practice, he said his players will work out before it is their turn to use the field.

Maigler said he believes strongly in weight training for lacrosse as it builds strength in the legs and core. Several athletes, including recently graduated David Glynn and seniors Wes Janick and Kyle Gattari, play both football and lacrosse.

This contributes toward the synergy between the coaching staffs, creating a welcoming environment around the facility. Maigler said this collegial climate extends to non-football athletes.

“The football culture has established that it’s a 365-day thing and it’s not all about game day. I try and piggyback on that,” Maigler said. “[Football coach Chuck Spagnoli] has been great about having a kid who’s not a football player and welcoming him in. I can send him to a [football] lift and they treat him like one of their own kids.”

Field hockey coach Melanie Walsh said her players don’t use the weight room at west campus, instead using equipment at east campus. According to Burkhalter, both soccer teams, along with baseball and softball, use the west campus facility.

“Not as regularly as football, but it’s an asset for them when it’s a rainy day or not sports-specific,” Burkhalter said. “They can get in there and make it a regular part of their routine.”