Now that 2014 Highland Park graduate Patrick Flavin is bombing the ball about 290 yards off the tee, it’s hard to believe how far his playing partners used to hit it past him. 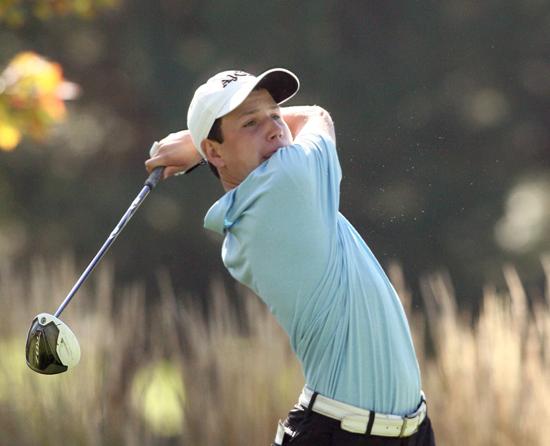 Now that 2014 Highland Park graduate Patrick Flavin is bombing the ball about 290 yards off the tee, it’s hard to believe how far his playing partners used to hit it past him.

When he was a diminutive freshman on the golf team, he would need a driver and 3-wood just to approach the greens of many par 4s. At the Illinois State Amateur July 15-17 at par-72, 7,028-yard Cantigny Golf, Flavin showed that he stacks up well against the state’s best players — regardless of their age.

Flavin opened strong with rounds of 71 and 72. Even after posting closing scores of 75 and 78, his four-round stroke total of 296 was still good for 18th place. Flavin is an incoming freshman for the University of Miami (Ohio).

“Junior tournaments are on shorter courses, so tournaments [like the State Am] show me that I can compete against the older guys and it’s good [momentum] going into college golf,” Flavin said.

Flavin is still just 5-foot-7 and 135 pounds, but his increased length off the tee has opened up the golf course and allowed him to attack more pins to set up birdie opportunities. But all those years of hitting woods and long irons and needing to develop a top-notch short game will continue to help Flavin when he competes at the college level.

“In the long run, it’s good for me,” he said. “Being a late bloomer forced me to [work] on all aspects of my game.”

Highland Park coach Paul Harris said one of the things that stands out about Flavin is his competitiveness.

“He’s a guy who hates to lose,” Harris said. “He’ll use any disappointment as fuel to motivate him to get better.”

Flavin’s dad, Mark, has been a big supporter of his son’s game and caddied for him at the State Amateur. Mark Flavin also was a good high school friend of Shawn Spieth, the father of budding PGA Tour superstar Jordan Spieth.

In fact, about four years ago Patrick Flavin played a practice round with Jordan Spieth in Texas.

“I remember that everything he hit was on a string,” Patrick Flavin said.
When Spieth was playing in the BMW Championship at Conway Farms Golf Club in Lake Forest in 2013, he had dinner at the Flavin home and enjoyed a spirited game of ping pong.

“It was a good time hanging out and he beat us all in ping pong,” Patrick Flavin said with a smile.

This summer, you can find Patrick Flavin at the Merit Club in Libertyville each day, usually practicing with Glenbrook North graduate Nick Hardy, who finished second in the State Amateur.

“He has a lot desire to get really good at golf and I’m the same way so we practice and play a lot together,” Hardy said. “He’s always been a good player and the additional distance has helped him out a lot.”