Barrington senior Keenan Dolezal had one request before the summer travel softball season. 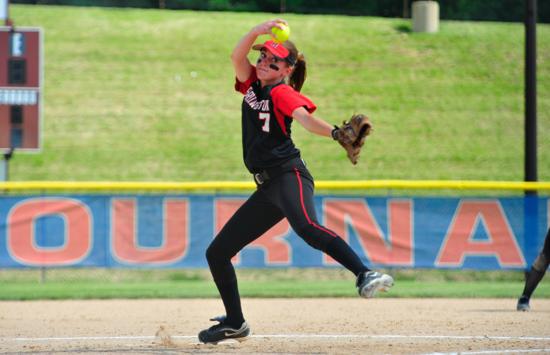 In this 2013 file photo, Barrington’s Keenan Dolezal delivers a pitch against St. Charles East in the Class 4A state semifinals. | File

Two years ago, Dolezal’s team, the Barrington Hurricanes, had traveled to Colorado for a tournament. The team didn’t make the trip last summer, but Dolezal wanted to go back. In the spring, she talked to Barrington coach Perry Peterson.

“She said, ‘I’m going to play for you one more year. Can we go to Colorado?’” Peterson said.

Not only did the Hurricanes go to Colorado, but they played some of the best softball in the history of the program this summer.

Over 37 days, the 18U Hurricanes played 43 games. They finished with a record of 33-8-2. The team had a decidedly Barrington feel as 10 of the 11 players were in the high school program last year. In fact, between the 18U and 16U teams, 60 percent of the players played for Barrington last year.

“We do it full scale by keeping our kids together,” Peterson said. “We are the exception as a lot of high school coaches don’t do much in the summer.”

A lot of high school coaches would love to have Dolezal pitching for them. She followed a terrific spring season with a dazzling summer. In 30 games, Dolezal threw 239 innings. She tossed 20 shutouts for a record of 30-8-2, finishing with an ERA of 0.64.

Dolezal said her plan over the summer was to work on honing her secondary pitches and throwing with more control.

“I worked on my change and other pitches,” Dolezal said. “I feel like I perfected being really consistent and hitting spots.”

Peterson added, “Her rise ball, her changeup could put people off balance. She had tremendous command of both sides of the plate. You could see she had better command.”

A strikeout-to-walk ratio of 9 to 1 (271 strikeouts against 35 walks) indicates Dolezal is heading into a much-deserved rest period in peak form. But even a pitcher as great as Dolezal needs a defense to play behind her and enough offense. The Hurricanes were impressive in the field over the summer, recording only 32 errors and finishing with a fielding percentage of .972.

As a team, Barrington scored 192 runs for an average of 4.46 runs per game. That was plenty with Dolezal on the mound. Sophomore center fielder Carly Kordich hit .391 with 45 hits and 29 runs. Junior second baseman Jamie Brown led the team with 15 extra base hits, finishing with four home runs and a .355 batting average.

“It was a great experience for our kids and proud of how they handled this situation,” Peterson said. “We were very cohesive with our play and they understand the system.”

While playing in the Colorado Sparkler tournament in early July, Barrington finished seventh out of 155 teams. During down time, the team took in a Colorado Rockies baseball game in Denver and went whitewater rafting in a Fort Collins river.

“That was the best day,” Dolezal said of the rafting trip. “It worked out really well.”