"He was gigantic, this tall and big guy, but he had a gentle way with children that I'd never seen," Lisa Dunham said of her former student. "He had a gift of compassion and kindness, qualities you need to be a teacher." 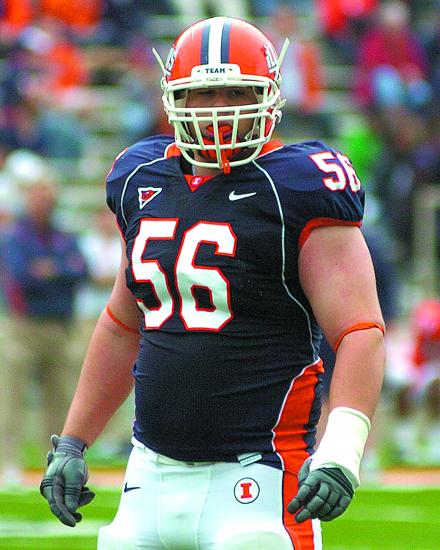 As a senior at Niles West, Shawn Afryl took Lisa Dunham's child development class. Part of the curriculum called for the students to develop lesson plans and apply them to a group of preschoolers.

Dunham said Afryl, who graduated in 2010 and went on to play football at Illinois, wanted to become a teacher one day, and she could tell he would be a natural at it.

"He was gigantic, this tall and big guy, but he had a gentle way with children that I'd never seen," she said. "He had a gift of compassion and kindness, qualities you need to be a teacher."

With his sights set on becoming a teacher, Afryl enrolled at Winona State in Winona, Minnesota, to earn a graduate degree in education and play football this upcoming season.

Afryl, a 22-year-old from Skokie, died Monday night after collapsing during a voluntary workout at Winona State. No official cause of death has been released, but former Niles West football coach Curtis Tate said the 6-foot-3, 310-pound Afryl likely died of cardiac arrest due to an undetected heart condition, according to the Associated Press.

Dunham said her two sons were big fans of Afryl. He, along with his best friend Zach Bastian, often babysat for Aidan and Declan Dunham.

"They absolutely loved it when Shawn and Zach came over," Lisa Dunham said.

For Declan Dunham's 11th birthday party last November, he invited Afryl, who entertained the children by playing football with them.

"The kids were climbing all over him," Dunham said. "He was the biggest teddy bear in the world."

Jeff Allen, who played two seasons with Afryl and graduated in 2012, said the offensive linemen lived in the same apartment complex and shared a special bond.

"He was a good dude," said Allen, who now plays for the Kansas City Chiefs. “He was quiet, but he was funny. He was a hard worker who never complained about anything."

Afryl played one game while at Illinois before graduating, but that didn't stop him from coming to practice and working like he was a starter, according to Tim Kynard, a defensive lineman and 2012 graduate. Kynard said he sometimes went up against Afryl in practices.

"We had some good battles out there," said Kynard, who makes his home in Hainesville, a town in Lake County. "He enjoyed the grind, being out there with his brothers. He was the ultimate team guy."

Jim Nudera can attest to that.

When Nudera came to Illinois as a freshman in 2011, the tight end said he was overwhelmed by the atmosphere. Afryl was one of the first players to introduce himself to Nudera and make him feel welcome.

"Your first semester at school can be tough, but it was made easier by having Shawn around," said Nudera, who's from Elmhurst and played football at York. "I am grateful to him for that."

Nudera said Afryl would come to his freshman dorm room to play video games, specifically NCAA Football on Nudera's PlayStation 3. Nudera said it was unusual for an upperclassman to do that.

"Now that I am older, I try to look at the example he set for me," Nudera said. "I honestly don't think I do as good of a job as Shawn did, but it helps push me. If everybody had the approach Shawn did, the transition from high school to college would be so much smoother.

"Above anything else, Shawn was just a good person. I think he would be blown away from all the people paying respects to him."

After Afryl’s death, a donation page on the crowdfunding website gofundme.com was set up to help the Afryls pay for funeral costs. As of Thursday morning, more than $32,000 had been raised by more than 500 people.

Bastian said he spent several hours at the Afryl family’s home Wednesday and accepted an offer to be one of the pallbearer's at Saturday's funeral service. The family gave Bastian their son's humidor and his Northern Illinois hat.

The two shared an affinity for cigars and were regular customers at the Cigar King in Skokie, which displays a photo of the two in the store. The camouflage Huskies hat was bought while Afryl visited Bastian at the DeKalb school years ago. At the time, Afryl played football at Illinois, but he bought the hat to support his friend's school of choice.

Although the two led busy lives after high school, Bastian said a day didn't go by that they wouldn't communicate in some way. Bastian said the two would go nearly a year without seeing each other, but the moment they did, it was like they were together the day before.

"It was one of those friendships that nothing was going to stop it," Bastian said. "No matter how far apart he was, he was going to be my brother."

"Shawn had a lot of expectations on him since he was a freshman because of his size, and he fulfilled every one of them. He was a leader on the field and in the weight room. In the hallways, everybody wanted to be around him. He got along with everybody. He didn't talk a lot, but when he did, people listened."

"He was a very mature young man, and he had some goals he wanted to reach in school. He also had a real passion for football, and he was excited to get an opportunity to continue playing."

"It didn't surprise me that Shawn wasn't done with football. You can't play forever, so you try and get as much out of it as you can. Football was important to him."

"I have not thought about what I would do to remember Shawn, but I know I will keep his memory alive for my children."