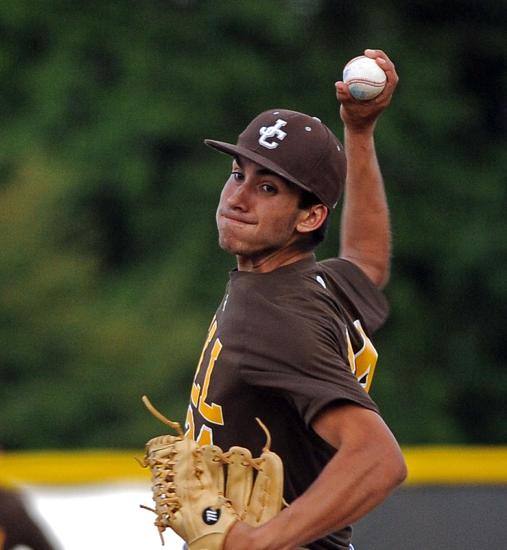 When Drake Fellows asks Nick Dalesandro for something, he usually gets it.

“I’ve been best friends with Drake since I was 5 years old,” Dalesandro said. “He’s like a little brother to me.”

But one thing Dalesandro wasn’t going to give away was the chance to be on the mound when Joliet Catholic won a state title — even a summer one.

So when Fellows told Dalesandro in the dugout at Benedictine University Thursday night, “Come on, let me finish it,” his buddy’s answer was, “I can’t do it.”

And Dalesandro didn’t waver, even when Nazareth rallied in the bottom of the seventh inning in the Phil Lawler Summer Classic final, as he led the Hilltoppers to a 3-1 win.

Joliet Catholic (19-0) became the first unbeaten champ in the unofficial summer state tourney’s 39-year history and won its first title since 1983. Nazareth, which was bidding for its second title in five seasons, finished 24-12.

Tourney MVP Dalesandro was dominant through six innings, throwing just 58 pitches and allowing just two baserunners — on an infield single and an error.

“Arguably, we ran into the best pitcher in the state,” Nazareth coach Lee Milano said. “And he’s probably the best competitor in the state.”

The rising junior had plenty of motivation, too. “This is already my third state championship game in three years (two summer, one spring),” Dalesandro said. “My freshman year, I kinda struggled out here on the mound. ... I just wanted to redeem myself and get this for the guys especially since I let the guys down during the spring season.”

Playing in probably the most top-heavy regional in the state, Joliet Catholic bowed out of the IHSA playoffs with a 3-1 regional semifinal loss.

“I’m not going to lie, after I lost to Lincoln-Way West I was pretty upset,” Dalesandro said. “But I knew, you know what, there’s another year. As a captain of this team, I’ve got to do everything I can. I can’t show any weakness for these guys.”

On Thursday, he didn’t.

But Nazareth starter Donald Kelly was effective as well, taking a shutout of his own into the top of the fifth. That’s when the Hilltoppers broke through.

Mitch Boe singled with one out and after a strikeout, Dalesandro reached on a two-base throwing error. Fellows drilled a two-run single on the next pitch.

“It’s always nerve-wracking, but you’ve got to block it out,” Fellows said of hitting in clutch situations. “Just try to drive the ball up the middle and get some runs.”

Joliet Catholic got another run in the top of the seventh when Jack Howard’s two-out single scored Dalesandro from second.

Then came an interesting bottom of the seventh. Brandon Bossard led off with a single but was thrown out trying to stretch it into a double by right fielder Alex Ragusa. Shane Gipson doubled, Kyle Kane was hit by a pitch and Matt Wilson singled to load the bases with one out.

Carson Bartels’ fielders’ choice grounder scored Gipson to make it 3-1 and Dalesandro ended it with his seventh strikeout.

“I thought he showed a lot of maturity on the mound,” Joliet Catholic coach Jared Voss said. “Sometimes Nick, the kind of competitor he is, he tries to strike out every single guy in the lineup. And he didn’t do that.

“He changed speeds. He throws 90, sure. But when he’s able to change speeds the way he was doing, he’s really effective.”

“I wanted to show them what a great experience a dog pile is,” Dalesandro said of his teammates.

And that’s what he did.