On March 5, 1994, Peter and Valerie Gallagher were at their home in Libertyville trying to listen to a high school boys basketball game on the radio. 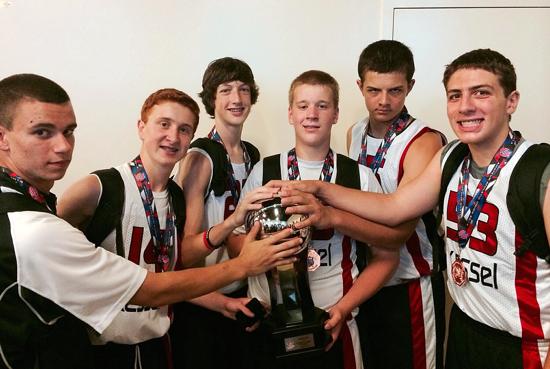 On March 5, 1994, Peter and Valerie Gallagher were at their home in Libertyville trying to listen to a high school boys basketball game on the radio.

The Wildcats were playing Mundelein in a sectional championship game in Waukegan. Unable to get a clear radio signal inside their house, the Gallaghers drove to the Gurnee Post Office a few miles away. With the reception clear, they could hear the announcer repeatedly call the name of a Mundelein guard named Kyle Kessel.

“I remember that game [Kessel] played. The name was in my head,” Peter Gallagher said.

Two decades after the Gallaghers listened as Kessel scored 33 points in a game Libertyville eventually won in triple overtime, their 14-year-old son, Brendan, is a member of the Kessel Heat 8th grade AAU team.

Earlier in July, the team finished sixth at the AAU Division II National Championship tournament at the ESPN Wide World of Sports complex near Orlando, Florida.

“When we wanted to do more with basketball, [the Kessel Heat organization] was the natural way to go. It’s been a great experience,” Peter Gallagher said. “I don’t know where else [Brendan Gallagher] would go.”

Kyle Kessel played college basketball and baseball at Texas A&M and played baseball in the minor leagues. When he retired from pro baseball in 2002, he and his father, Dennis Kessel, a member of the Illinois Coaches Hall of Fame, started Kessel Training in Libertyville. They started with nine AAU teams. This summer, there are 45 boys and girls teams.

Kyle Kessel brings the same work ethic that defined him as a player to coaching. He often begins days on the court at 9 a.m., finishing at 6:30 p.m. Kyle Kessel doesn’t sell his captive audience of hoops dreamers on the promise of college scholarships. His role is that of a teacher.

“We are a basketball training academy. There is no secret how you get good. You have to practice and practice every day,” said Kyle Kessel, who is the second-leading scorer in Lake County history and is a member of the Illinois Basketball Hall of Fame. “I don’t consider myself in the realm as the other [AAU] coaches. There’s not much coaching in those programs.”

Conor Peterson is a 6-foot-5 senior at Libertyville. He’s a member of the Kessel Heat 11th Grade Black team, filled with the program’s best players. Peterson said practices are a study in basketball fundamentals where props are often used.

“We’ll have cones and chairs. A chair is a defender and we have to make a move. A cone is where a defender is supposed to be,” Peterson said. “We focus on a single ability, how to handle the ball, dribble when a double teams comes. It prepares us for the games ahead.”

Peterson’s team finished the AAU tournament season at the Division I Nationals in Louisville, Kentucky, last weekend. The roster, which includes Xavier Williams of Fremd and Wyatt Lindell of Marian Central, contains no players who are considered elite Division I prospects.

Kyle Kessel said the majority of his players have college aspirations. Participating in AAU basketball only enhances their chances, and he provides a platform for exposure. But Kyle Kessel believes himself to be an outlier, preaching a focus on the here and now.

“My selling point is the coaching and instruction. It’s the best around,” Kyle Kessel said. “They are not all in it to play in college.”

Peter Gallagher said that for now, his son is having fun just getting better at basketball. It’s the same sport that had his mom and dad huddled around a car radio 20 years ago as Kyle Kessel put on a dazzling performance.

“The name [Kessel] is legendary in basketball,” Peter Gallagher said.