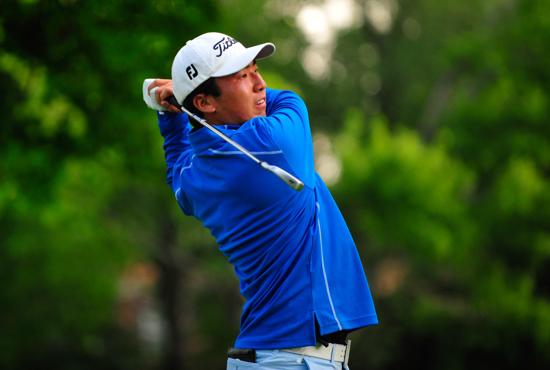 Doug Ghim watches the flight of his ball during the second round of the Western Amateur at The Beverly Country Club Wednesday. Ghim finished with a course-record round of 8-under 63. | Gary Middendorf/for Sun-Times Media

CHICAGO — Doug Ghim rolled in a slippery 10-foot birdie putt on the 18th green at The Beverly Country Club, tipped his head back and started laughing.

It’s been a fun couple of days for the 18-year-old Arlington Heights native and Buffalo Grove graduate.

Scratch that, it’s been a fun couple of weeks for Ghim, who continued his whirlwind tour of elite amateur golf Wednesday with an 8-under 63 that gave him the lead through two rounds of the Western Amateur. Less than two weeks after his run to the finals of the U.S. Amateur Public Links Championship, Ghim navigated the tree-lined fairways and treacherous greens at Beverly well enough to break Tom Weiskopf’s 47-year-old competitive course record of 64, set during the 1967 Western Open Pro-Am.

This particular under-par round caught the attention of everyone at Beverly Wednesday, including Beau Hossler, a sophomore-to-be who will play with Ghim at Texas later this year.

“It’s impressive. He’s a hell of a player, obviously," said Hossler, who finished tied for 10th at 4 under. "He’s played well all summer. It’s a great round, and I’m not all that surprised, honestly.”

Ghim shot a 2-under 69 in the tournament’s first round Tuesday, putting him at 10 under at the 36-hole cut. California's Bryson DeChambeau is second at 7 under.

The field was pared down to the top 44 and ties Wednesday, with 50 players making the even-par cut. Those players will play 36 holes Thursday to determine the 16 who advance to the match-play portion of the event Friday.

Ghim said the unique grind of the Western Amateur played into his strategy Wednesday. He finished the first nine holes in 3-under 33 but stayed aggressive on his way to the clubhouse, making birdies on 10, 11 and 13 before stuffing his approach shot on 14 to about 4 feet for another birdie.

The birdie putt on 18 that had him smiling was a tricky one, making a 90-degree turn to catch the right side of the hole.

“You’re trying to win the 72-hole [stroke-play] portion and then move on to match play,” Ghim said. “It’s like two different tournaments, and I’m trying to do the best I can in the first one.”

That’s a strategy that paid off at the U.S. Public Links in Newton, Kansas, where Ghim finished as co-medalist in stroke play and advanced to the finals of match play before losing on the first extra hole. This time, despite a hectic couple of weeks, he might have a slight competitive advantage.

“It’s a little bit easier when a tournament this big is at home,” he said with a smile. “Sleeping in your own bed, I’m not really that tired.”

STILL IN THE GAME

Andrew Price said he came into this week's Western Amateur feeling good about his game.

"That got the juices flowing a bit," said Price, who lives in Lake Bluff.

In the Western Amateur field for the second time since 2012 and fifth time overall, Price followed his opening-round 70 with an even-par 71 on Wednesday and is tied for 30th at 1 under. That keeps him in contention to qualify for match play, which is reserved for the low 16 players after Thursday.

"I have a fighting chance," Price said. "Honestly, I am freed up for [Thursday] in my mind. I will just try and make birdies, and who knows?"

Price said he didn't hit his irons as well Wednesday as he did in Tuesday's first round, but he made fewer mental mistakes. He carded two birdies and two bogeys.

"I scrapped it around and grinded it out [Wednesday]," Price said. "There definitely are some scoring opportunities, but they also are some big numbers out there. You have to be in a decent spot off the tee and being under the hole is paramount."

Nick Hardy is one of three players in the field with current ties to the Illinois men's golf team who made the 36-hole cut. The Northbrook native and incoming freshman shot 71 in the second round and is tied for 13th at 3 under. He said his attention all week has been about advancing to  match play Friday.

But he cautioned against getting too far ahead of himself.

"There's so much golf to go that you can't really look at anything," he said. "But I was not focused on the [first cut] cause I was not close to it."

Brian Campbell, who will be a senior at Illinois, was the low Illini over the first two days at 6 under after posting a 64 in the second round Wednesday. Charlie Danielson, a rising junior, is at 1 under. Dylan Meyer, who is part of Hardy's class, missed the cut.

— Matt Harness contributed to this report