On any given day at the North Baltimore Aquatic Club, Conor Dwyer said he could be training in the same pool as swimmers who have earned 28 Olympic medals. 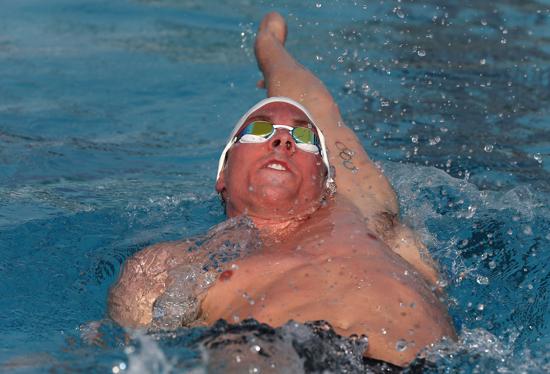 In this April 25 photo, Loyola graduate Conor Dwyer swims the backstroke as he competes in the men’s 400-meter individual medley during the Arena Grand Prix at Mesa in Mesa, Arizona. | Christian Petersen/Getty Images

On any given day at the North Baltimore Aquatic Club, Conor Dwyer said he could be training in the same pool as swimmers who have earned 28 Olympic medals.

One of those is Michael Phelps, the best swimmer in the sport’s history. Phelps owns a record 22 medals, including 18 golds.

While Phelps is attempting a comeback of sorts at age 29, Dwyer, 25, is squarely in his prime. In June at the Arena Grand Prix at Santa Clara, the Winnetka native and Loyola graduate beat Phelps in the 200-meter individual medley and finished first with a time of 1 minute, 59.49 seconds.

“He’s very much at the top of his sport,” said Bob Bowman, Dwyer’s coach at the club.

Dwyer is preparing for his biggest month of this year. The Phillips 66 National Championships run Wednesday-Aug. 10 in Irvine, California, and the Pan Pacific Swimming Championships are Aug. 21-24 in Gold Coast, Australia. At the national meet, Dwyer is trying to qualify for next year’s FINA World Championships in Kazan, Russia.

“August is the biggest month for me in two years,” said Dwyer, who lives in Phelps’ house in Baltimore. “I’m not too worried about it. I will just go out there and win as many events as I can.”

In part, Dwyer got to where he is today by winning a gold medal in the 4x200 freestyle relay at the 2012 Olympic Games in London. That opened doors for Dwyer, including a chance to train with Bowman at his camp in Colorado Springs, Colorado, in May 2013. The two have been working together ever since.

“It was scary, at first,” Dwyer said of switching to a new coach. “There’s some doubt that you could fail, but Bob has that kind of résumé that puts that doubt to rest. I knew I was making the right choice.”

Pat Dwyer, Conor Dwyer’s father, said his son has been blessed with great coaches and mentors throughout his career, including former Loyola swimming coach Dennis Stonequist and University of Florida men’s swimming coach Gregg Troy. But at this point in Conor Dwyer’s career, Bowman is the best person to take him to the next level, Pat Dwyer believes.

“He’s had unbelievable people helping him in the sport who’ve kept his head down and focused,” Pat Dwyer said. “But being with Bob and Michael, it’s allowed Conor to take that next step. He’s learning from the best.”

Not long after the partnership started, Conor Dwyer earned a silver medal at the FINA World Championships in the 200 free. Conor Dwyer went on to win the overall men’s title in the Arena Grand Prix Series for the 2013-14 season by finishing first six times.

“He’s very motivated, and that makes him very coachable,” Bowman said. “We wanted to make some technical changes, and it paid off immediately.”
Phelps has been like a second coach, Dwyer said.

“He won’t do all the yardage anymore because he’s done it, but he will watch us swim,” said Dwyer, who’s known Phelps since 2011. “If there is something wrong with my stroke, he will help me out. He’s the best person to have around you day in and day out.”