Carolina Carmichael breaks out for record-setting season at Memphis

For years, Carolina Carmichael had been fixated on one height. She’d tried countless times in practice and succeeded. But in meets, she’d failed to clear the bar. 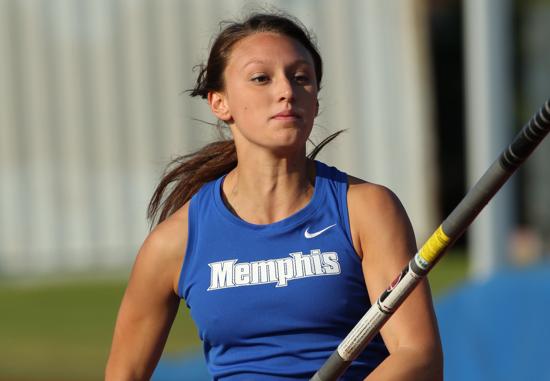 Memphis pole vaulter and Lake Forest graduate Carolina Carmichael increased her best vault by over a foot in less than two months during her sophomore season. | Memphis Athletics Communications

A sophomore pole vaulter at Memphis and a former Lake Forest state champion, Carmichael was competing in a meet at Auburn. For years, she had been fixated on one height. She’d tried countless times in practice and succeeded. But in meets, she’d failed to clear the bar.

“I never made it to 13 feet. As soon as the bar went up, I would change something [in my routine],” Carmichael said. “I tried making excuses, but it was all in my head.”

“This is where I usually have a bad block,” Carmichael said.

But the familiar feeling of tension that before had overwhelmed her body was replaced by tranquility. Her mind free of anxiety, she sprinted down the runway and leaped over the bar. She had done it. She had eclipsed 13 feet.

“Two and a half years of frustrating times, and at that moment it clicked,” Carmichael said. “I was screaming.”

For Carmichael, clearing 13 feet represented more than a personal record. She conquered what can typically be the heaviest burden for an otherwise high-performing athlete: mental inhibition. And as the rest of Carmichael’s season proved, once that hurdle is scaled, the next one often becomes easier.

At the American Athletic Conference meet in May, Carmichael’s vault of 13-4.5 was good for first place. Then at the Division I Regional Championships, she vaulted a spectacular 13-9.25. It broke the school record she had set just a few weeks prior. As a top-12 finisher, Carmichael qualified for the NCAA Outdoor Track and Field Championships held in Eugene, Oregon, in June. There, she earned second-team All-America honors with a 10th-place finish (13-7.25).

As stunning as the progression was on paper — Carmichael increased her best vault by over a foot in less than two months — her Memphis pole vaulting coach, Tyler Frazier, said he was not all that surprised.

“She’s a really good athlete. One of her best attributes is her speed down the runway,” Frazier said. “But we always say pole vault is 90 percent mental. It can be a stressful, frustrating event. Her mental toughness, being patient and training with some great teammates, finally this year it started paying off.”

Carmichael is not resting on her spring accomplishments this summer. She is spending time in Lake Forest and in Texas before heading back to Memphis in August. Her mother, Toni, runs a club track team that recently competed in the USATF National Junior Olympic Track and Field Championships in Houston, Texas.

Carolina Carmichael said she’s learning a lot about her sport by teaching.

“I can tell them what helped me fix a part of my vault,” she said. “It helps me as a pole vaulter to say words a certain way.”

Carolina Carmichael said she hopes to be invited to the USATF women’s camp next summer. There is much to accomplish between now and then, but she will the college track season armed with the memories of last spring, when she broke through a previously unreachable milestone and never slowed down.

“I still have a whole lot to improve on. Now I have set more goals for myself so I don’t become complacent,” she said.