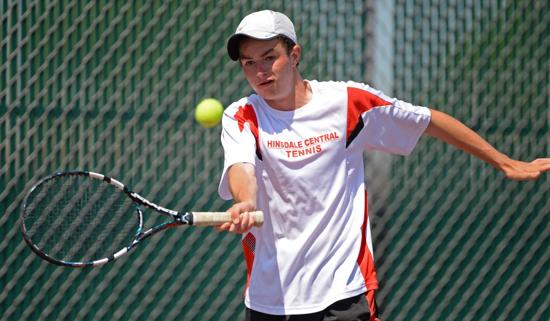 Eddie Grabill’s remarkable year is getting even better.

“I’m just extremely happy to have the tennis results I’ve had this year,” Grabill said. “It was awesome winning state and going into this tournament I had a lot of confidence. The worst part is every opponent you play knows that you’re the state champ.”

With great results come even greater expectations. But that isn’t something that’s weighing on Grabill’s thought process.

“I don’t think about [expectations] or let the pressure get to me,” Grabill said. “I just take it one match at a time.”

Grabill had to work hard for his finish at the Midwest Closed, which featured 128 players. After losing just four sets in his first two matches, it got much tougher. He dropped the first set, 1-6, to Dayton recruit Zach Berry in the round of 32, but bounced back to win 6-3, 6-2.

“He gave me a ton of problems,” Grabill said. “He didn’t really have a weakness. He had a good serve and was strong at the net. I didn’t have any answers for what he was throwing at me.”

“I think that [state] was his coming-out party,” said Grabill’s coach Robbye Poole, a pro at Score Tennis and Fitness in Countryside. “He’s one of the hardest workers a coach can have day in and day out. He’s blue collar, does his work and then goes home and does more work. His dedication to the game is why he’s made it so far. Once he tightens up some of the things we’re working on, I think he has another two or three levels.”

Grabill’s recent success has at least seven Division I programs knocking on his door, according to tennisrecruiting.net. At 5-foot-11, he doesn’t have Joyce’s impressive 6-4 frame, but Poole thinks that won’t hinder interest, given how well Grabill is playing.

“Size will not matter,” Poole said. “He won two three-hour matches [at Midwest Closed]. Coaches are starting to realize size is not the only thing. He’s definitely opened the eyes of a lot of college coaches.” 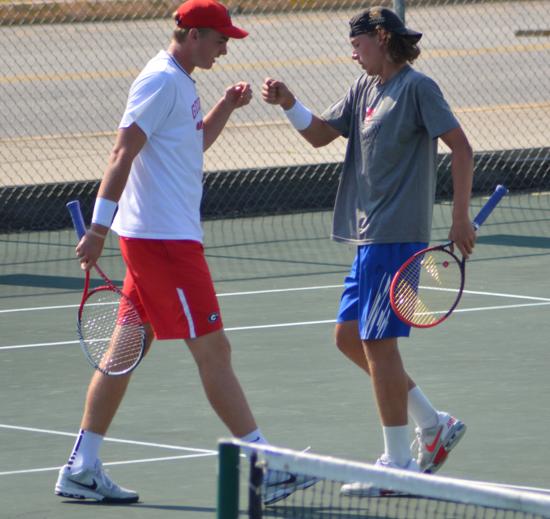 Martin Joyce (left) fist-bumps partner Paul Oosterbaan during their run to the championship of the USTA Midwest Outdoor Closed championship in Indianapolis. | USTA

Joyce experienced his own success at the Midwest Closed, taking first place in doubles with partner Paul Oosterbaan, who has accepted a scholarship to Georgia. The duo defeated Sameer Kumar and Daniel Rayl 6-4, 6-4 in the championship match.

Joyce also lost in the round of 16 in the singles bracket.

Poole, who is also Joyce’s coach, thinks the incoming senior was tripped up by some unexpected circumstance. The Ohio State commitment had been playing doubles for the Red Devils, but the departure of Michael Lorenzini pushed Joyce back to singles prior to the IHSA meet.

“I think the state tournament was a unique situation,” Poole said. “He had nothing to gain winning, because he had already won [singles in 2013]. He had a huge target on his back and there was a lot of pressure and he started the season playing doubles. But Martin has amazing talent and that’s why he’s ranked in the country and going to Ohio State.”