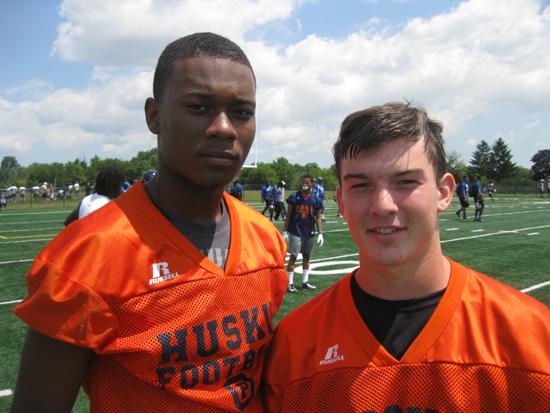 Every day of summer practice is another opportunity for Lloyd Yates to connect with his new wide receivers.

Yates verbally committed July 17 to play for Northwestern, so now that his recruiting concerns are out of the way, the 6-foot-2, 185-pound senior can return to addressing his biggest priority of the summer — developing chemistry with his passing targets.

Before the summer, Yates met with his new receivers at the school practice field to go through routes and some plays.

“[Practices] are huge,”Yates said. “You can’t develop chemistry overnight. We have to do the extra work.”

OPRF ended its 7-on-7 season at its own session July 16 and competed in the 11-team West Suburban Conference 7-on-7 July 10 at Addison Trail. The Huskies now take a break until the beginning of preseason practice Aug. 11.

“This year I do not have anyone like Simmie Cobbs,” Yates said of the Indiana commitment. “Last year he could make plays on every play, cold. He was 6-[foot]-5, 205 pounds.”

This summer’s leading receivers have been senior Kejuan Ratcliff and junior Cole Fields.

The 6-2, 178-pound Ratcliff last year caught three passes for 48 yards in OPRF’s second game, a 38-3 win over Leyden. He missed three games midway through the season with a sprained left ankle.

“I’m working on my speed and getting faster,” Ratcliff said. “I’m doing my own workouts. I’m excited and ready. I can’t wait for the season to start.”

Fields is new to the program, having transferred from Mundelein at the end of the school year when his father changed teaching jobs. The Oklahoma-born Fields previously lived in River Forest.

Fields’ best sport might be lacrosse. The midfielder played for Mundelein’s varsity team as a freshman and sophomore and is a member of True Lacrosse club. He also played nose guard last season for Mundelein’s sophomore team.

At 5-10, 170 pounds, Fields may not look like a West Suburban Silver starting wide receiver.

“I did not play wide receiver [last year] until the last game,” Fields said. “I’ve played a little bit there. I like catching the ball. It’s pretty fun.”