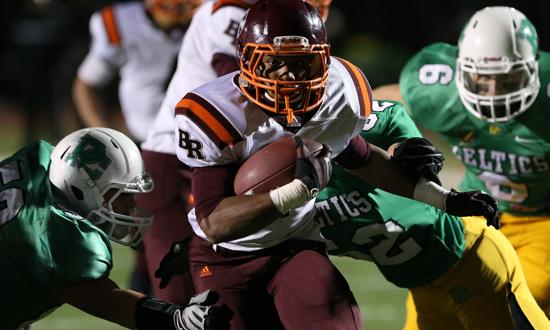 Brother Rice's Marcus Jones familiarity with the spread offense was one of the leading factors in committing to Northern Illinois. | Allen Cunningham/For Sun-Times Media

The excitement of playing close to home was something Brother Rice’s Marcus Jones couldn’t pass up.

The rising senior running back has made his college choice: He is headed to Northern Illinois.

“After camp on Sunday I went up (to DeKalb) with my parents,” Jones said. “Growing up I always loved Northern Illinois. What’s better than playing right in your hometown?

“I believe if I work hard enough I can play early. I want to be the hometown hero and win a couple of MAC (Mid-American Conference) championships.”

The Huskies offense also is something Jones is excited about, since it’s similar to the one run by Brother Rice.

“It’s a perfect fit,” Jones said. “We already run a spread offense at my high school, so it won’t be that difficult of a transition.”

The 5-foot-8, 175-pound Jones liked what the Huskies had to offer off the field as well.

“My parents were very comfortable with the education aspect of the commitment,” Jones said, “especially the graduation rate. I believe Northern Illinois is a place where I can be successful athletically and academically, and also there’s a possibility of playing time very early.”

Jones provides an explosive back for Brother Rice and is looking to bring more of the same to Northern Illinois. Scout.com national recruiting analyst Allen Trieu had the chance to evaluate Jones, who in the spring won the Core 6 Athletes showcase offensive MVP.

“Jones won the fastest man, then showed he could go side to side in drills,” Trieu said. “He demonstrated good pass receiving skills and really shined in the pass blocking drills where he stoned several top linebackers.”

The coaching staff in DeKalb seems pretty excited about many of those talents.

“Coach Rod Carey was very excited and happy when I told him I was committing,” Jones said. “He called my commitment like a marriage.”

The recruiting process was an enjoyable one for Jones, who also had interest from Western Michigan and Central Michigan.

“Learning about the different schools and what they had to offer was the best part of the process,” Jones said. “It was fun going to different schools, meeting the staffs and trying on the jerseys.”