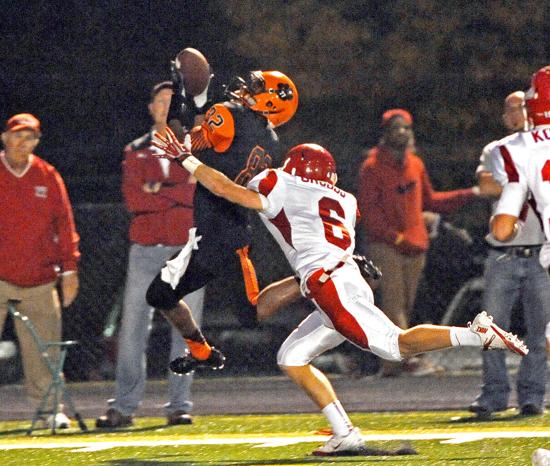 Providence tight end Nate Vejvoda recently added an offer that he couldn’t refuse. After Vejvoda committed to Miami of Ohio a month ago, Iowa decided to throw its name into the fray with a scholarship offer.

‘‘They were the first school that started recruiting me,’’ Vejvoda said. ‘‘From a while back, I had a connection with Iowa. Then I went for my first visit and loved everything about it. They kept in contact with me, and then they gave me feedback that they thought I was a good football player. I love the tradition and the family atmosphere that goes along with Iowa.’’

The 6-5, 210-pounder consulted with his family, then decided to de-commit from Miami of Ohio and make a verbal pledge to the Hawkeyes.

‘‘When I got the offer, I kind of knew that I wanted to be a Hawkeye, so it was stressful thinking about how I was going to de-commit,’’ Vejvoda said. ‘‘But when I did, [Miami of Ohio] coach Chuck Martin was really nice about it. He wished me the best of luck and told me I would always have a place there. I appreciate the opportunity they gave me.’’

Iowa’s offer came only 48 hours before Vejvoda decided to give his commitment.

‘‘My family was all really surprised and really happy for me when they offered,’’ Vejvoda said. ‘‘We weren’t really expecting it at the time. I was just in shock. I was just like, ‘Wow.’ I was really happy. It was a big relief that I got the offer.’’

Wheaton Warrenville South receiver Keishawn Watson recently picked up a scholarship offer from Western Michigan. It didn’t take him long to realize he wanted to accept it, and he committed to the Broncos.

‘‘I sat down with my family and figured out first how I was going to fit academically, then came football,’’ Watson said. ‘‘And Western Michigan has what I wanted in both categories.’’

Watson’s most natural position is receiver, but he will get a chance to play defensive back and special teams when he arrives on campus. The 5-11, 175-pounder also had interest from Central Michigan, Miami of Ohio, Bowling Green and NIU.