Stagg looking to take that next step

Stagg aims to make the IHSA playoffs this season after an eight-year absence. 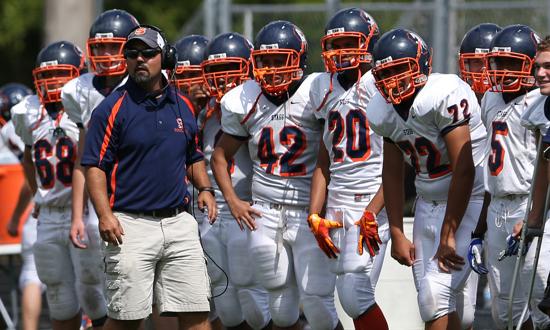 Stagg coach Mike Fahey is well aware of the challenges that await his football team in 2014.

This will be the second season the Chargers will compete in the rugged SouthWest Suburban Blue Division, where they finished 2-5 in ’13.

While the Red Division, of which Stagg was a member until last season, is no picnic, the Blue is regarded as a step up in competition. It’s difficult to argue with that assessment, considering Blue teams Bolingbrook, Homewood-Flossmoor and Lincoln-Way East likely will rank among the state’s elite in 2014.

“It’s a huge challenge,” Fahey said of competing in the Blue. “But our goal is to qualify for the playoffs.”

If Stagg has any shot of making the postseason — which it hasn’t since ’05 — beating Hillcrest and Oak Lawn in Weeks 1 and 2 is imperative.

After that, the Chargers face Lincoln-Way East and Bolingbrook in consecutive weeks. The good news is they don’t see H-F until Week 9.

“I think the key is we’re going to have to win a game we’re not supposed to win on paper,” Fahey said.

That’s precisely what the Chargers needed to do in 2013 to qualify for the playoffs. They defeated Hillcrest, Oak Lawn, Joliet Central and Joliet West but lost to Lincoln-Way East, H-F, Bolingbrook, Sandburg and Lockport.

The loss to Lockport, a 25-21 final, was a game Stagg could have and should have won. It’s the type of opponent Fahey is referring to when he says the Chargers are “going to have to win a game we’re not supposed to win on paper” to get over the hump and qualify for the postseason. At 4-5, the Lockport outcome was the difference between qualifying for the playoffs and the season ending after nine weeks.

“If we would have beat Lockport, it would have given our program a huge boost going in the right direction,” Fahey said.

There’s no denying the program is headed in the right direction. Nearly 70 varsity players participated in the Chargers’ summer camp, a clear indication that after years of low turnout interest in football is on the rise at the Palos Hills school.

“We’re happy with the numbers and the depth we have this season,” said Fahey, entering his second season with the Chargers.

With seven starters returning on defense, including linebackers Ryan Slager, Frank Knaperek, Dennis Egan and Gary Kopca, Stagg should make it difficult for opponents to cross the goal line.

Mostafa El-leboudi will anchor the defensive line and Aaron Ford will lead the secondary.

“We return a lot of guys with experience on defense,” Fahey said. “We’re going to have to rely on the defense, especially early.”

“Konrad has some varsity experience,” Fahey said. “Joe might be a little quicker and fits into our option attack a little better. Both throw a decent ball. It’s going to come down to who makes the better decisions running the option.”

The Chargers will bank on multiple threats out of the backfield in seniors Tom Poskus, Dennis Egan and Tyson Felder and junior Shane McMahon. When it’s time to go to the air, senior Jeff Goral, who sat out last season, and junior Tyquan Foster have the potential to excite.

“We have a lot of competition, which is good,” Fahey said. “Getting Goral back out is a big pickup and everyone is excited about that. There’s a lot more energy in the program. This is a good group of seniors.”