Arizona State came into the picture after former Indiana coach Tracy Smith took the Sun Devils job in June. Stanicek said Smith had been recruiting Stadler to play for the Hoosiers. 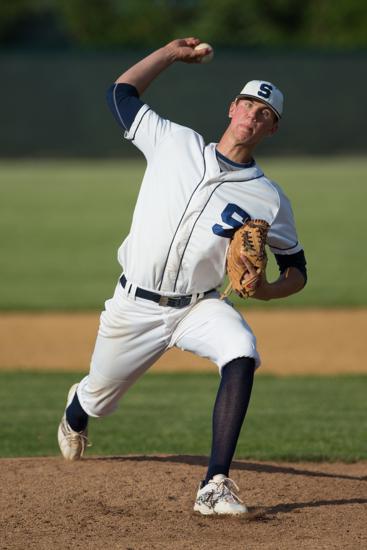 In this June 5 photo, Glenbrook South's Fitz Stadler throws a pitch during against Mundelein in the sectional semifinals. | Nic Summers/for Sun-Times Media

Stadler, a 6-foot-8 right-handed pitcher, went 8-0 with a 0.81 ERA as a junior for the Titans in 2014. Stadler made his decision Friday. Stanicek said Stadler improved his stock with his success in the spring and this summer. Stadler currently is in Long Beach, California, for the Area Code Games, one of the most prestigious baseball showcases in the country.

"The potential factor for Fitz is something that was hard for schools to pass up," Stanicek said.

Arizona State, one of the best programs in the country, came into the picture after former Indiana coach Tracy Smith took the Sun Devils job in June. Stanicek said Smith had been recruiting Stadler to play for the Hoosiers. Stadler's oldest brother, Walker Stadler, played for Indiana, and older brother, Sully Stadler, still is on the Hoosiers roster.

While Indiana played at the College World Series for the first time in program history in 2013, the Sun Devils have been there four times since 2005 and have won five national championships. Major League Baseball players who first played at Arizona State include Reggie Jackson, Barry Bonds, Ian Kinsler, Andre Ethier, Dustin Pedroia and Glenbrook North graduate Jason Kipnis.

"It's just a phenomenal opportunity for Fitz to go to a program with as rich of a baseball history as any university in the country," Stanicek said. "Arizona State has been a mainstay at the highest level for years and years."