When the owners of Stella’s Restaurant and Batting Cages were looking to name their business, Anna Matson thought of the best cook she knew. 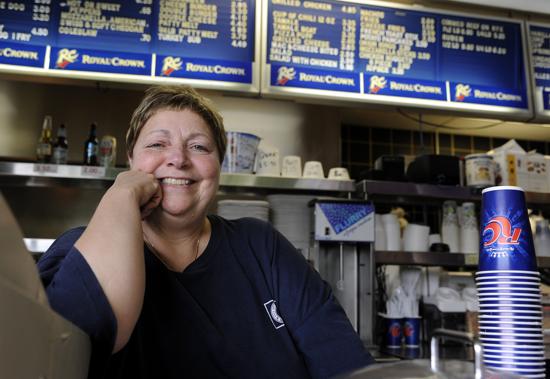 Stella's co-owner Anna Matson stands behind the counter of the establishment named for her mother. | Steve Johnston/For Sun-Times

LYONS — Stella’s Restaurant and Batting Cages has been a downtown Lyons institution for 28 years, but long before the restaurant, co-owner Carey Matson was satisfied with running just the cages to provide baseball and softball players with a place to hit.

Matson was inspired by his son Al, who was diagnosed with cancer while seeing a doctor about his tonsils as a child. Al Matson, now 40, survived and wanted to play baseball, eventually joining Lyons McCook Little League.

Today, baseball and softball players from across the Chicago area stream to Stella’s, which houses nine working cages for all levels, from college to youth leagues.

After finishing construction of the batting cages, Carey Matson asked his wife, Anna, if she would like to open a restaurant. What sounded like a good idea at the time has turned into a labor of love.

“My husband asked me what I would like to call [the restaurant],” Anna Matson, 64, said. “[I told him] I’d like to call it Stella’s after my mother, who had already passed by then, because she was the best cook I’ve ever known.”

Carey Matson, 65, continues to find ways to improve the business. More than 15 years ago, Carey built a roof and added garage doors so the batting cages can be used year round.

Carey and Anna Matson live in an apartment next door above the dance studio they own and Carey has made plans to expand the parking lot.

Carey Matson grew up in the area and played Little League for Lyons McCook. He graduated from Lyons in 1967, while Anna graduated from Morton. They have a daughter, Mimi, 43.

Anna Matson imitates Garrett Morris from “Saturday Night Live” when she talks about her business.

“Baseball has been berry, berry good to me,” Anna Matson said. “It has been. God bless. We love all the kids. It’s more like a family because I have children that came here when they were kids and now they are bringing their own children.”

Stella's is where hitters get into swing of things