High school football coaches and players around Lake County have varying opinions about the new contact rules implemented by the IHSA in April. 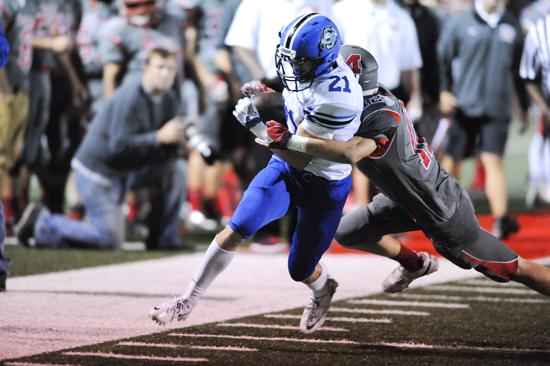 Lake Zurich’s Dylan Schassler (left) is tackled to the ground by Mundelein’s Dillon O’Donoghue during a game Sept. 20 of last season. | File

LAKE ZURICH — High school football coaches and players around Lake County have varying opinions about the new contact rules implemented by the IHSA in April.

For the first time in Illinois, players were not allowed to wear full pads or participate in full-contact drills this summer. Tackling to the ground was made off limits, too. The changes are an effort by the IHSA to limit head injuries like concussions and lesser sub-concussive hits, which some scientists believe can be equally dangerous to kids whose brains are still developing.

“The interesting thing is, me and my staff keep track of the numbers and statistics in all our sports,” Libertyville coach Mike Jones said. “And believe it or not, last year, football wasn’t the sport we had the most concussions in at our school. And I don’t want to single any one sport out either, because the numbers seem to vary from year to year.

“As far as my own players go, I don’t think the change will be a huge deal. It may affect how some teams play the first few weeks a little. But we’ve never been a team that’s gone full pads all the time during the summer anyway. We’d alternate pads and no pads, things like that. We’re not trying to beat our kids up before the real games even begin. I can tell you we’ve seen an increase in minor turf burns on kids’ knees and things like that, because they couldn’t wear knee pads.”

In past seasons, teams were allowed to start practicing in full pads beginning on the fifth day of the 25-day summer practice period, which spans between the end of one school year and the start of the following preseason (typically between June-August).

“[It hasn’t bothered me] at all. The only difference with wearing full pads is you don’t take to the ground, just fit up the ballcarrier and practice form tackling,” Skarzynski said. “It shouldn’t affect the team because we still go full speed, just not to the ground, so our practices have game-speed intensity.”

Lake Zurich coach David Proffitt has a problem with the rule changes.

“The other thing the IHSA changed is it limited the number of days you can be in helmets and shoulder pads, and it also stated players have to be in helmets-only a certain amount of days,” said Proffitt, who was inducted into the Illinois High School Football Coaches Association Hall of Fame during the offseason. “I don’t like the rule, one. The game of football is blocking and tackling. Basically what they’re saying is, you’re limited on how to teach kids how to tackle properly.

“You can do certain things in helmets and shoulder pads that pertain to tackling and the fundamentals of learning it. But when you can’t bring a kid to the ground, which is the name of the game, you’re limiting yourself from being able to teach them safe, correct methods. Now, when preseason practices start in mid-August, we only have two weeks to teach our kids properly before the season begins.”

Carmel coach Andy Bitto had similar thoughts, but was more concerned about how the changes may affect his newer players.

“That’s my one real worry,” Bitto said. “I haven’t had the chance to see a lot of my younger players who are on varsity for the first time in full-contact drills, and that’s a big concern.

“I don’t really worry about the older, veteran guys who’ve experienced it as much. Hopefully the 13 days, or two weeks they give us to get ready for the season is enough time. We’ll see. I guess on the positive side, it’s forced us to work even harder as coaches and hold ourselves more accountable to teach the Xs and Os, and the finer details of what we’re trying to accomplish without using actual shell-on-shell blocking and tackling.”