Defending a championship is always challenging — regardless of the sport. 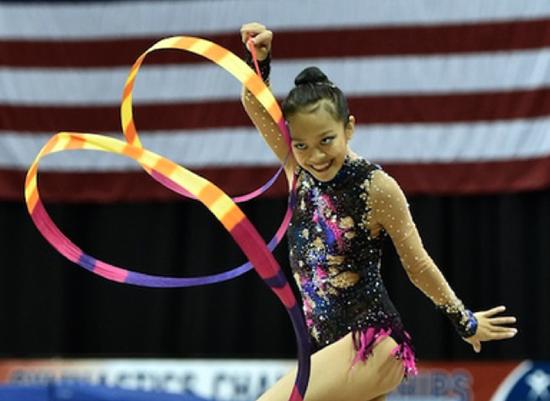 Libertyville’s Laura Zeng, 14, executes a routine with a ribbon at the 2014 USA Rhythmic Gymnastics Championships in Louisville, Kentucky, in July. | Submitted

Defending a championship is always challenging — regardless of the sport.
Libertyville resident Laura Zeng, 14, found a way to turn back the field July 15-19 and win a second consecutive junior national championship at the 2014 USA Rhythmic Gymnastics Championships in Louisville, Kentucky.

Rhythmic gymnastics is an Olympic sport that revolves around manipulating one or two pieces of apparatus such as clubs, a hoop, rope, a ball or a ribbon. It combines elements of sports such as traditional gymnastics, dance and ballet.

In addition to winning the overall title, Zeng placed first in the ball and hoop categories.

“When I won the first time, I was proud of myself but I felt as if I had to work even harder this year,” she said. “I was so happy when they announced I won and I was able to step on the podium.”

Zeng prepared for the national tournament with her trademark work ethic, consistency and determination.

“Laura is absolutely amazing to watch,” said Highland Park resident Jazzy Kerby, who won the senior national championship and trains with Zeng at North Shore Rhythmic Gymnastics Center in Deerfield. “She has a ton of energy and confidence and has a really good future ahead of her.”

Zeng said she doesn’t have a favorite event but that she has used the same routine the longest for ball and hoop.

“For ball, the music is usually slower and there’s more lulls,” she said. “I like it because I feel elegant when I do it.”

Zeng said the best way to start to understand rhythmic gymnastics is to watch it. That’s why when her friends ask about the sport, she often refers them to YouTube videos.

“It’s a really fun and unique sport,” she said.

She continues to stay active with ballet. She earned scholarships the last two summers to do intensive sessions with different ballets including the Pacific Northwest Ballet in Seattle.

“Ballet is a great foundation for rhythmic and helps me improve my technique,” Zeng said.

Now, Zeng’s focus is on competing at the Youth Olympic Games in Nanjing, China, Aug. 16 to 27. China is the country where both her parents were born and much of her extended family still lives.

“That’s where my heritage is and it will be so exciting to compete there,” Zeng said.