Before they had any idea what — if any — sport their daughter would pursue, Jasmine Kerber’s parents decided they would nickname her “Jazzy.” 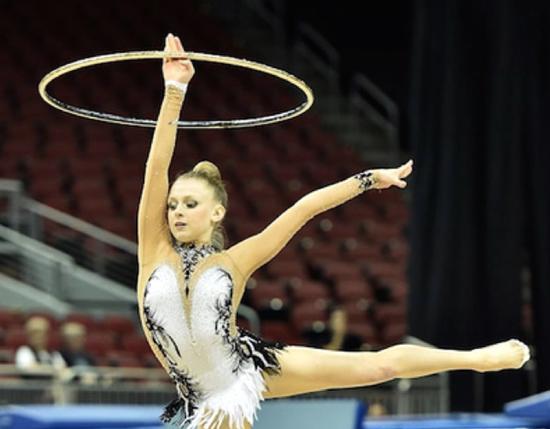 Before they had any idea what — if any — sport their daughter would pursue, Jasmine Kerber’s parents decided they would nickname her “Jazzy.”

“They knew that even before I was born,” said Jazzy Kerber, a senior-to-be at Highland Park. “I guess they liked the sound of it.”

Of course, now that she is on track to possibly compete in the 2016 Olympics in rhythmic gymnastics, the nickname could not be any more appropriate. At the 2014 USA Rhythmic Gymnastics Championships in Louisville, Kentucky, July 15-19, Kerber won the senior national championship. Her teammate at North Shore Rhythmic Gymnastics Center in Deerfield, Libertyville resident Laura Zeng, won the junior title.

“Jazzy is a great role model for me,” Zeng said. “She has more experience and I’m able to ask her anything. Her turns are amazing and she’s very elegant.”

“I usually say that it’s a combination of dance and gymnastics [without] the traditional gymnastics equipment like beams, bars and vault,” Kerber said. “One of the things I like about rhythmic is that it’s a sport and an art. The artistic element makes it really interesting to watch, but at the same time it’s a competitive sport. One of the most incredible things about rhythmic is being able to make difficult things look easy.”

“I had never heard of it before, but I remember watching the older girls and looking up to them,” she said. “A lot of little kids are intrigued by it because there’s that combination of ability along with a performance, costumes and music.”

When Kerber began training at North Shore Rhythmic, she couldn’t believe the skill level of the older girls.

“The things they could do amazed me,” she said. “It was motivating to think that if I kept going I could maybe hope to be at that level someday.”

As Kerber continued to progress and excel, she had the opportunity to travel around the world, with trips to places like Moscow and Paris.

“I feel like I’ve gotten to see the world through a different view,” she said. “I’ve had the chance to meet a lot of interesting people from around the world and have had so many opportunities because of rhythmic gymnastics.”

Fresh off her senior national title, Kerber plans to pursue her Olympic dreams. After her senior year at Highland Park, she anticipates taking a gap year to focus on her sport with the goal of competing in the 2016 Olympics.
In the interim, she is looking forward to another year of combining regular school life with gymnastics.

“Even though rhythmic gymnastics is a huge part of my life, I like having other things that are important to me,” she said. “It adds an element of balance.”