A day in the life of an AAU player: Lake Forest's Noah Karras

In his own words, Noah Karras shares what it’s like to play a summer of travel basketball. 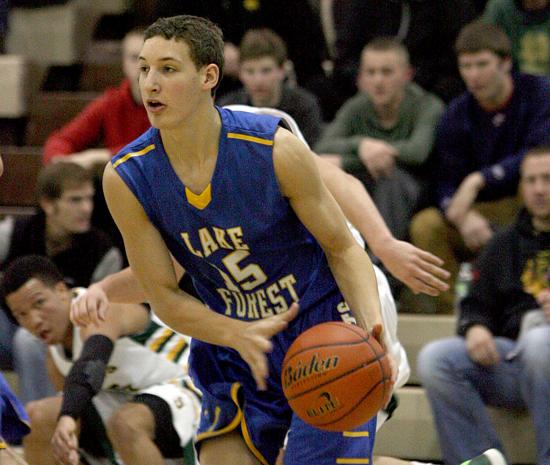 Some of my first memories of basketball involve watching with my grandpa, Shelly Karras. He’s a University of Illinois graduate and a big fan. He’d take me to games when the Fighting Illini were good, when Dee Brown and Deron Williams were on the team. I was only 8 years old, but I remember how much I liked watching them, how much I loved the atmosphere. That I may one day play in front of crowds that size was beyond what I was thinking then.

I started to play organized basketball for a Lake Forest recreation league team in the fifth grade. In the seventh grade, my dad started taking me to Lake Forest High School games. The Scouts had a shooting guard named Matt Vogrich. He earned a scholarship to Michigan and became the school’s all-time leading scorer. That’s when I really started to see basketball as part of my future.

I joined an AAU team — Next Level Performance — for the first time while I was a student at Deerpath Middle School. I began to work with the coaches who helped shape the player I am today. Matt’s dad, Bob, taught me about shot mechanics. Lynn Mitchem showed me how to create my own shot. Brad Johnstin introduced ball-handling drills I never would have learned on my own. I became aware of how many other people showed interest in my basketball career. It motivated me to keep working, to keep getting better.

By my sophomore year of high school, I was with Fundamental U, a new AAU program started by coach Michael Weinstein. He refined my mechanics, allowing me to get lots of shots up and build consistency. My junior year at Lake Forest (in 2013-14), I made the varsity and led the team in three-point shooting percentage. In June of this year, I received my first Division I offer, from UIC. I had come a long way from watching the Fighting Illini with my grandpa as a young boy.

From July 23-27, my Fundamental U 17U Black team — the club’s elite team — played in the prestigious Bigfoot Hoops tournament in Las Vegas (finishing 2-3). This is the dairy of our first day.

I woke up in my hotel in Las Vegas (we are staying at Mandalay Bay) very anxious but excited to begin play in the Bigfoot Hoops Las Vegas Invitational. The night before I could barely sleep because I tried to visualize playing in the games. As I think about where to go for breakfast, I’m nervous and anxious. This tournament isn’t any different than the other ones I’ve played in except for one thing — it’s my last tournament. I feel like I need to prove myself again.

After a breakfast for champions in the hotel — eggs, bacon, pancakes — I’m feeling more relaxed. I’m visualizing myself playing well, which gives me goosebumps.

We leave the hotel for our first game, scheduled to tip at 2:30 p.m. against I-CAN All-Stars Elite. As I walk into the gym I see Kentucky men’s basketball coach John Calipari and Syracuse coach Jim Boeheim. I also see UIC coach Howard Moore and Stew Robinson, his assistant. It is motivating for me to play my best knowing a lot of coaches will be around.

We lose our point guard, Drew Cayce, to an ankle injury in the first half. Our team had some mental lapses due to fatigue and being undermanned, and eventually lost 56-54. I played pretty well, scoring 14 points on 4-of-7 shooting.

We have another game at 6:50 p.m., so we arrive back to the hotel to relax and get our minds right. These tournaments are a grind mentally and physically. We will play five games in 48 hours in Las Vegas, and are playing in our fifth tournament this month. Although I played pretty well in the first game, I only went 2-of-2 from the free throw line. That’s one part of my game I am working on this tournament and summer. I’m a three-point shooter, and defenders will close pretty tight. I know by driving and getting to the free throw line, I can mix up my game and help my team more.

After a tough loss in the afternoon, we come back with a dramatic win against Seattle Rotary at Spring Valley High School. I hit a three-point shot to give us a two-point lead with a minute to go. They tie the game, only to have Loyola senior guard Mike Mangan score an acrobatic layup with two seconds left and give us a 42-40 victory. It was a huge win for us as we were without our injured floor general, Drew Cayce. I feel like I asserted myself with the ball more, taking it up the floor after defensive rebounds. That’s the thing about AAU; you have to figure things out. College coaches want to see you demonstrate confidence and effort.

Me and the guys celebrate by having dinner at the Burger Bar, located inside Mandalay Bay. I go with the bacon burger with swiss cheese and grilled onions. It’s always fun to be with the guys after a win as we talk about the game, shots we made, crazy plays. We decide not to walk the famous Vegas strip tonight. We’ll save that for another night.