There are many reasons why Naperville high schools have been so good in swimming over the years. 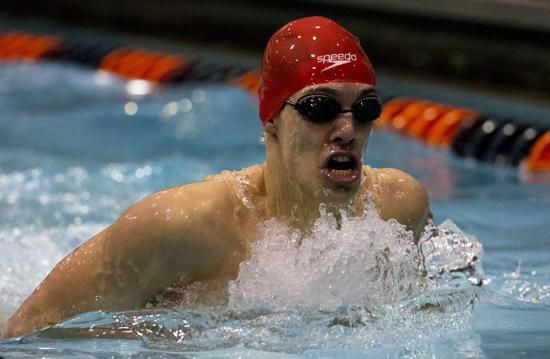 Naperville Central's Scott Piper competes in the 200-yard individual medley during the state finals in February. Swimming this summer for Naper Carriage Hill, Piper won the 100 IM and the 100 backstroke in the 15-18 age bracket. | Jon Durr/For Sun-TImes M

There are many reasons why Naperville high schools have been so good in swimming over the years.

Talented athletes and knowledgeable coaches help the teams succeed in any given year, but Naperville has a feeder system that is matched by few other cities.

First there are the private clubs that provide the intense training that elite athletes require. But what sets Naperville apart from most towns is a vast Park District program that provides opportunities for every level of swimmer.

The Naperville Swim Conference is comprised of 22 neighborhood pools that give more than 3,000 kids ages 5-18 a chance to learn and compete.

“There are a lot of opportunities to swim, which is why Naperville is always so strong,” Scott Piper said.

Piper is a junior-to-be at Naperville Central, which has won two state titles since 2002. His brother, Keith, helped the Redhawks to the 2010 championship and just completed a four-year college career at Connecticut.

With about 200 members, Naper Carriage Hill is one of the larger neighborhood teams. Piper began swimming there when he was 5 and first competed at the U6 age group.

“At that level you can drop 10 seconds off your best time in the matter of a week, which is really exciting and sparks your interest,” Piper said. “If you like it, a lot of people start doing club during the winter. It gets harder and harder as you get older but then it gets more rewarding.”

Piper and many other local high school stars found their early experiences so rewarding that they still swim with their neighborhood team in the summers, even though most also train at clubs year-round.

During the summer season, Piper will practice from 6-8:30 a.m. and 2-4 p.m. on Mondays, Wednesdays and Fridays and have club practices on Tuesdays and Thursdays. The park district has weekend meets about twice a month.

In between practices, many high school swimmers also spend time coaching younger kids at the neighborhood pools, a result of the positive experiences they remember from earlier years.

“It was awesome to be coached by high school kids,” Piper said. “They’re good role models.

The neighborhood competition also gives local swimmers a unique opportunity to compete against friends and teammates. It is not unusual for swimmers from different high schools to train together on club teams, but with the neighborhood pools the opposite is also true, as high school teammates find themselves going up against each other.

Piper and Christian May, who won the city 100 breaststroke title, swam for Naper Carriage Hill but fellow Redhawk Eric Gerlach represented Maplebrook 2 and won the 50 free, 100 free and 50 butterfly.

“It’s really fun because a lot of guys who are on the same club team are on different pools, so it’s kind of weird competing against your friends,” Piper said. “But it builds camaraderie. During high school season we joke around about whose Park District team is better.”

Not every kid who participates at his neighborhood pool goes on to do club or even high school, but the system has produced so much talent that Naperville Central, Naperville North and Neuqua Valley have all captured state titles since 1996. Each school has won trophies in the past five seasons.

The high school programs also produce the coaches who guide the next generation.

Todd Capen, who led Naperville North to the 1996 state title, is now one of Piper’s coaches on the Academy Bullets.

“I haven’t done any coaching but a lot of my friends coach, so I hang out with them,” said Piper, who does give swim lessons. “As you grow up, you get so much out of it and you find it so rewarding. You want to give back and that starts the whole cycle over again.”