If offseason conditioning and summer camps are barometers to success during the season, Lockport football is in the midst of a resurgence. 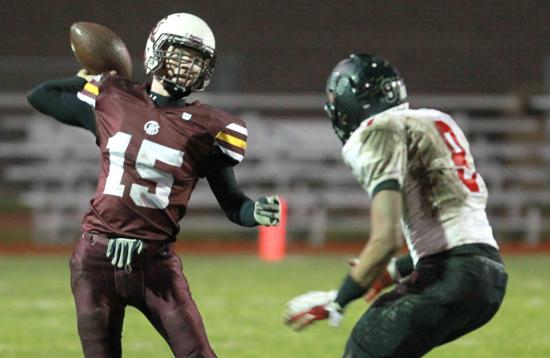 If offseason conditioning and summer camps are barometers to success during the season, Lockport football is in the midst of a resurgence.

Nearly 90 varsity players were out for the summer camps, including potential difference-makers who have returned to the football field after previously hanging up the cleats.

Much of the renewed optimism centers around the hiring of coach Dan Starkey, who guided New Trier to the playoffs in each of his four seasons (2010 through ’13).

“It’s been really good,” Starkey said of the transition. “We had a busy summer. I’ve been really impressed with the kids. They did a great job during the offseason in the weight room and they competed hard during the summer.”

Amid all the enthusiasm, however, is the reality of losing senior Tyler Johnson for the season. Johnson, who started at running back and linebacker, suffered a torn ACL during wrestling competition.

“Tyler would have been a three-year starter and would have played both sides of the ball,” Starkey said. “It’s a tough loss. But we’re going to have to pick up the pieces.”

The good news for the Porters is there numerous players to help pick up those pieces. Starkey has installed a spread attack style offense and has three quality running backs in seniors Cam Credit and Zac Wright and junior Matt Skobel.

“Jeremy and Deiondre are both really athletic, dual threats,” Starkey said. “If they’re not playing quarterback, they’ll both be playing somewhere else.”

Whichever player is under center, he’ll have multiple options to target at receiver. Seniors Jon Zapotoczny and Sean Kelly return from last season.

However, the addition of Brian Bellair, Brandon Credit and Jon Wheaton to the receiving corps should provide major benefits — in due time. Bellair hasn’t strapped on the pads since junior high; Brandon Credit returns after taking a few years off and Wheaton never has played organized football, though at 6-foot-7, he’ll provide an excellent target.

Wheaton is a top player on the Porters volleyball team.

“I’m excited to have those three guys out playing,” Starkey said. “It’s pretty nice to have a 6-foot-7 receiver.”

There’s also some experience on the offensive line, with Matt Chmielewski and Chris Murino returning a year stronger and wiser.

If there’s a concern, it’s in the secondary, where the Porters lack varsity experience, though junior Derrius Rogers is expected to make an impact.

If the Porters are going to improve upon their 3-6 record in 2013, an ability to look out for one another will be vital, according to Starkey.

“From parents to players to coaches, teamwork is going to be key,” Starkey said. “We all have to be in this together. We definitely have enough talent to be a playoff team. We hope to get off to a good start and play our best football as the season progresses into October.”