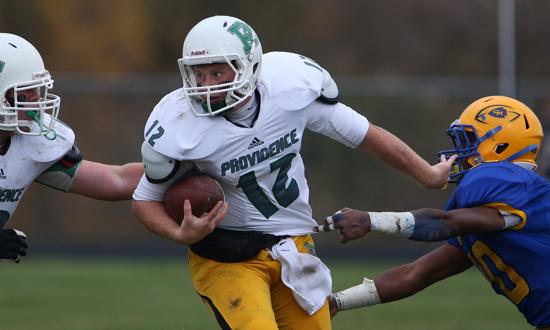 Can it be? Didn’t the high school baseball season just start?

On Monday, football teams will take to the practice field, largely with the same goal: qualify for the playoffs. Without achieving that, there’s no chance of experiencing the ultimate goal: a state championship.

Here are a few observations, focusing heavily on the Catholic League Blue, as we prepare for the start to the 2014 season:

I never would count out a three-peat performance by Frank Lenti’s squad. Until proved otherwise, Mount Carmel again is the favorite.

However, this is a far more inexperienced squad, one that returns just one starter on offense. The defense will be stout, and the junior class is extremely skilled. But without an established starter at any of the skill positions, the Caravan may start slowly before reaching full potential in the second half of the season.

St. Rita’s defense could be the best in the Blue.

Seven starters return, boasting a trio of excellent linebackers in Gerald Whitaker, Matt Mitchell and Tom Rehfeld, and an outstanding tandem in the secondary in Danny Gleaves and Marty Bechina. I’ve heard whispers the Mustangs will struggle to consistently find the end zone. I don’t buy it. Running back Tyree Lee and receiver Brandon Gaston, along with a sprinkling of Gleaves in the backfield, should generate some fireworks.

It’s a monumental task for opposing secondaries to try to contain one Division I-caliber receiver. What’s the likelihood of containing two?

That’s the prospect opponents of Providence will face this season. Miles Boykin and Nate Vejvoda not only have excellent hands and speed, each stands 6-4. Boykin has committed to Notre Dame, Vejvoda to Iowa. They have a quarterback in Justin Hunniford who can get them the ball.

The concern is how much time behind an inexperienced line Hunniford will have to locate a receiver. There also are question marks regarding the D-line, which lacks experience.

If the Celtics can develop consistency on both sides of the line, this could be a special season.

I can’t recall a team that finished 3-6 the previous season facing higher expectations than Brother Rice will be in 2014.

Yes, the Crusaders return a bevy of starters, led by running back Marcus Jones, quarterback Alex Alarcon and lineman Patrick Hosty. Jones, a Northern Illinois recruit, is a difference-maker. Alarcon racked up close to 2,300 all-purpose yards last season. The kid is a playmaker. The junior and sophomore classes achieved considerable success at the lower levels.

I can relate to the optimism. However, now it’s time to strap on the big boy pants. If Rice can avoid the injury bug and the juniors produce at a high level, specifically on both sides of the line, it shall live up to expectations.

Lemont is another team that finished 3-6 a year ago and is expected to rebound big time.

Based on schedule, the Indians’ path to glory is more doable than is Brother Rice’s. Coach Bret Kooi brings state championship experience from his days at Lockport. Receiver Flynn Nagel brings all kinds of skill after spending three years at Marist.

Plus, there are 15 returning starters, including four offensive lineman and four defensive backs. Quarterback Chris Thompson is back, along with receivers Jimmy Kapouros and Jamie Glista. It all should add up to a super season.

Most of my fellow scribes are handing the Class 6A state championship trophy to Richards. No question, there’s a lot to like.

My concern is the loss of linebackers Romel Hill and Andrew Venerable, both three-year starters. Their leadership and knowledge, as well as their ability on the field, will be missed.

If the Bulldogs can overcome those obstacles, please make room for me on the bandwagon.