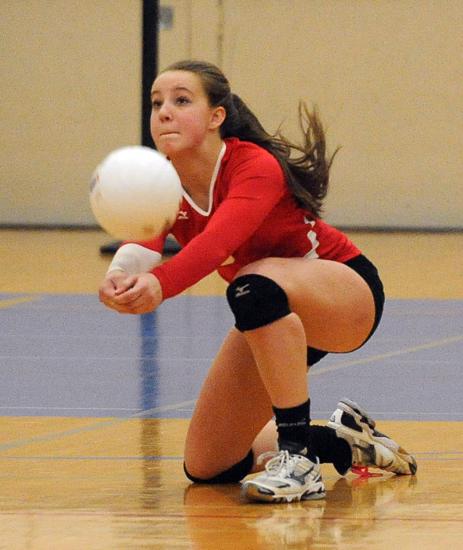 Alex Davis, digging out a return during a 2012 sectional final, played libero during Hinsdale Central’s win over St. Francis in the summer league championship. | File

It marked the first time in the seniors’ careers that Hinsdale Central won the title of the 40-team Tuesday night summer league.

“It was good to see the seniors win [summer league] in their senior years,” Hinsdale Central coach Kelly Stapleton, who is permitted to begin preseason practice on Aug. 11, said.

The Red Devils were missing 6-foot-2 senior outside hitter Lauren Fuller, a Clarendon Hills resident who grew up in Pasadena, California. She verbally committed to San Diego in the offseason and was away at summer camp for the Tereros.

“It was really unexpected since we were without Lauren,” senior libero Alex Davis said. “She is probably our best hitter. We proved we can still win without her.”

Senior outside hitter Regan Serwat was impressed by the Devils’ ability to rally after St. Francis led 9-1 and 18-11 in the first set.

“It’s pretty exciting for our senior year,” Serwat said. “We’re starting off with that [title], so we’re going in with a bang.”

Both Hinsdale Central and St. Francis were missing key players. The Devils also were without 5-11 senior Nikki Hilbrich, a returning starter who was on vacation in Canada.

“It was really competitive,” Stapleton said. “St. Francis had a lot of smaller defensive players. There were a lot of big rallies.”

Stapleton shuffled lineups during the summer league to give playing time to more players. In the final, the third-year coach stuck with a set lineup that included Harvard-bound senior Brooke Istvan as the only setter.