“I’ve been thrilled with what he has done,” Flames diving coach Susan Bromberg said. 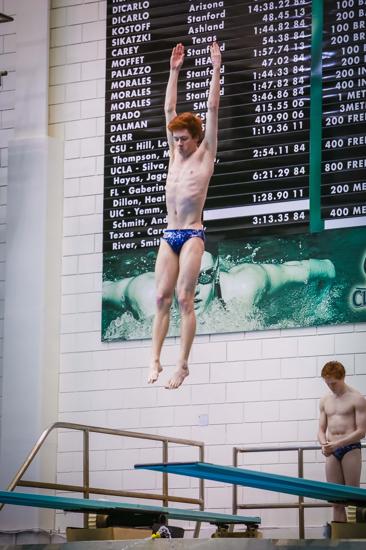 Maine East grad Jeremy Rohrman was a relative novice on the three-meter springboard when he started diving at Illinois-Chicago, but by the Horizon League Championships he was an obvious choice to dive for the Flames. | Photos courtesy UIC Athletics

As Susan Bromberg put together her three-person lineup for the Horizon League Championships earlier this year, the Illinois-Chicago diving coach said she considered just one athlete to be a no-brainer selection.

That diver was Jeremy Rohrman, who graduated from Maine East in 2013. Bromberg’s faith in Rohrman was largely a result of his consistency, she said, and it showed how much progress he made during his first collegiate season.

“I’ve been thrilled with what he has done,” Bromberg said. “I’d seen him dive [before he enrolled at Illinois-Chicago], but I wasn’t really sure what he could do. When he came here his freshman year, he soaked everything in.”

Rohrman entered college as a relative novice on the three-meter springboard. He’d competed and practiced solely on a one-meter springboard at Maine East, growing more confident and more skilled during his career. He finished 23rd at the state meet as a senior.

Maine East doesn’t have a three-meter board, which meant that Rohrman had to get comfortable at a new height quickly.

“Technically, there’s really nothing different about it,” Rohrman said. “It’s just a little higher, but the height definitely gets to you when you first start off.”

Bromberg compared getting acclimated to the three-meter board to trying an extreme sport like snowboarding for the first time; it tends to be terrifying initially but becomes less so with practice.

Rohrman found that to be true. He did simple dives early on to help himself adjust.

“The first step I needed to do on three-meter was get comfortable,” Rohrman said. “From there, it was kind of adding on what I knew from one-meter to do a little bit harder dives.”

Two big assets Rohrman had entering college were that he spins well and has an excellent tuck, Bromberg said. His skills on a one-meter board served as building blocks where he could add a rotation to certain dives when competing at three meters.

Rohrman also used the new training tools at his disposal, like an Olympic-sized trampoline that he said helped him work on his body movements without the unforgiving water waiting for him if things went wrong.

Rohrman ended up with a solid list of three-meter dives by the end of his freshman year, and he saw a big increase in his scores. He started the year with a six-dive score of 219.53 in the three-meter Oct. 5 against Wright State, and then recorded a season-high mark of 280.00 in the same event at the UIC Diving Invitational on Jan. 25.

Next year, Rohrman said his goal is to develop different two and one-half pikes on the three-meter board, as well as a better twister. He also wants to continue his progress in the one-meter, where he improved by 65.93 points as a freshman.