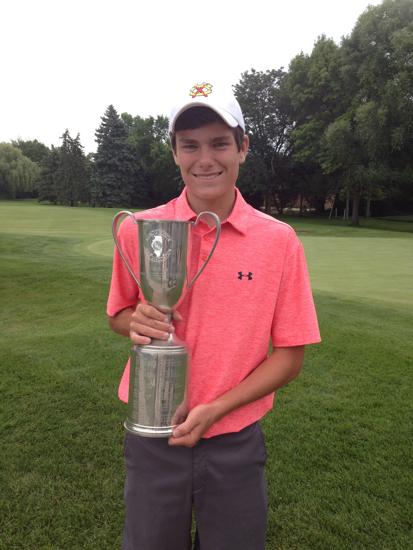 A year ago, Andrew Huber and Matt Murlick both made the trip to The Den at Fox Creek in Bloomington as alternates for the Class 3A boys golf state tournament.

This season, the two rising juniors at New Trier want to do more than watch the action.

“A goal of mine is to play in the state tournament,” Huber said.

Murlick said it was a good learning experience to be in Bloomington as a sophomore, one he hopes will help him if he’s fortunate enough to secure a spot in the postseason lineup in October.

“I’ve practiced a lot and played a lot of tournaments this summer, so I can play down there this year,” Murlick said.

In July, Huber won the CDGA’s Junior Amateur at Mill Creek Golf Club in Geneva by shooting 69-67-75 for a 2-under 211 to win by two strokes. It was the first major victory of his career.

“That was big for me,” he said. “That was my breakthrough. That gave me a lot of confidence going forward.”

New Trier, which is trying for its first state title since 2003, is scheduled to host its 54-hole tryouts Wednesday-Aug. 15 at Winnetka Golf Club. The Trevians finished second to Hinsdale Central in Class 3A last season, the third time since 2009 they’ve been the runner-up in the state.

Three of the Trevians’ top six from last year graduated, but New Trier coach Pete Drevline said the nucleus of last year’s team should be back in senior Will Connelly, senior Jack Junge and junior Nick Iserloth. Senior Will Seaman was an alternate at state along with Huber and Murlick.

“We felt like all nine players deserved to be down there,” said Drevline, who usually brings six starters and two alternates to the state tournament. “We probably will be counting on guys like Andrew, Matt and Will for the upcoming season, so we wanted them to see what it was all about. But it’s a competitive team, and it’s always about who is hot at the right time.”

In an effort to make the most of this season, Murlick gave up playing hockey year round to concentrate on getting his golf game in proper shape.

“It was a lot of fun last year to walk around with Andrew and Will [at the state tournament], and it was good that I got to see everybody play under that pressure without worrying about how I would play,” Murlick said. “But now I am ready.”