The Glenview native scored 23 goals for Illinois last season and trained with the U-23 Women’s National Team. 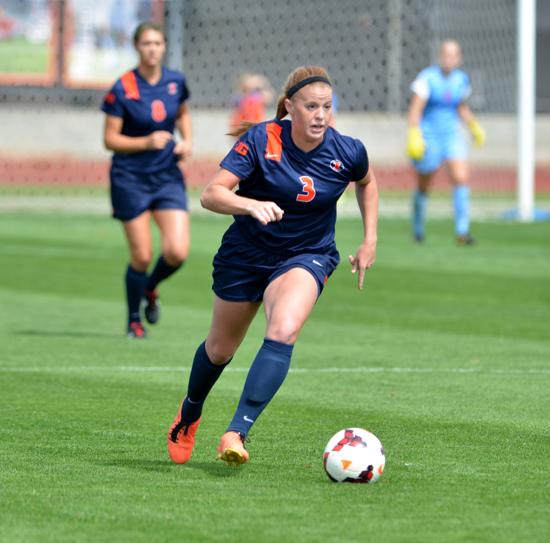 Jannelle Flaws, who is pictured on Sept. 15, 2013, scored a school-record 23 goals last season. That tied for the most goals scored in Division I in 2013. | University of Illinois Athletics

The last year has been full of firsts for Jannelle Flaws.

The run started during Flaws’ redshirt junior season at Illinois when she emerged as an offensive force on the women’s soccer team. Flaws averaged one goal per game in 2013. She scored a school-record 23 goals, which broke Emily Brown’s previous record of 18 and put the Glenview native in a tie with Rachel Daly of St. John’s for the most goals scored in Division I last season.

This summer, Flaws experienced another milestone when she was called into her first national team training camp. Flaws spent a week in Seattle training with the other members of the U-23 Women’s National Team during the middle of July. She was the only player from the Big Ten to attend.

“It was something I’ve always wanted to do,” Flaws said of playing for the national team. “So to finally be at a point in my life where I’m healthy and good enough to be called into [a training camp] was very exciting.”

Flaws has reached new heights of late, yet her path to success has had a pair of significant roadblocks over the last four years. She suffered two complete tears of the ACL in her right knee during that span — the first was in Glenbrook South’s Class 3A state semifinal game in 2010 and the second caused her to miss her entire redshirt sophomore season at Illinois — and she entered her redshirt junior season having scored just three goals for the Illini.

Flaws maintained lofty aspirations despite her knee injuries, however. Playing for the U.S. Women’s National Team remains a major one, she said, and so too does playing professional soccer.

Both Illinois coach Janet Rayfield and Chris King, who coached Flaws on the Chicago Red Stars’ Reserves team this summer, said she has the potential to get drafted once her collegiate career concludes.

Doing so will likely require her to continue to improve in different ways — like building her fitness base and having better first touches under pressure — but Flaws’ biggest strengths remain what they’ve always been: She’s a natural goal scorer, Rayfield said, and she’s very difficult to stop.

King added: “I always joke around with her and tell her that I don’t think there’s a shot that she’s ever not liked. She’ll pretty much shoot from anywhere. It’s almost as if she doesn’t have a conscious and that’s what good strikers have to have.”

Flaws was named to the MAC Hermann Trophy watch list Thursday. The Hermann Trophy is the sport's top honor at the college level and it is equivalent to college football's Heisman Trophy.

Flaws is also extremely driven. That’s been one of her traits since she was in middle school, she said.

Flaws focuses on the goal-scoring chances she didn’t convert after matches instead of the goals she scored. She then tries to correct the mistakes that led to those chances being squandered, which is a major reason why she doesn’t feel content heading into the upcoming Illinois season despite the past 365 days.

“Even though I scored 23 goals, I’m not satisfied,” Flaws said. “Individually, I’m a person who likes to do the next big thing.”