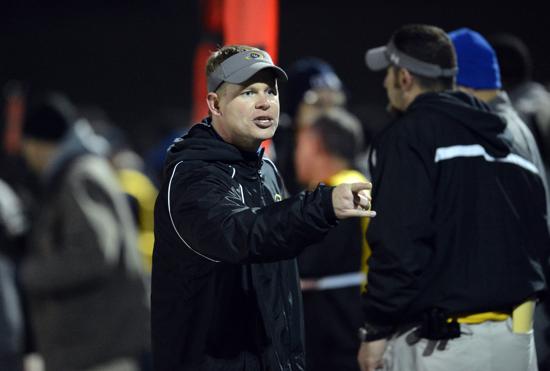 The Spartans don’t boast a lot of depth — approximately 43 kids are on the varsity roster — due in large part to small senior and junior classes.

However, the infusion of seven sophomores to the varsity roster should make Marian Catholic more competitive in 2014 and fully set in motion a turnaround that fans hope will begin to take full effect in the near future.

“Looking at the silver lining of smaller classes, the kids who have stuck it out as seniors and juniors, though they haven’t had a lot of success, they continue to work hard,” Verde said. “They’re tough kids. We hope as we add in some sophomores to the mix, it will make us more competitive.”

The Spartans are coming off a 2-7 season, including going winless (0-6) in the rugged East Suburban Catholic Conference. Just six starters return from that squad. That, along with the low numbers, is why Verde has dipped into his sophomore talent pool.

Those sophomores are part of a class that went 9-0 as freshmen in 2013.

“The kids we’re bringing up are talented and are hard workers, too,” Verde said. “We feel we’ll have more talent and size on the field this year.”

Vince Magana and Robert Clifton are the only returning starters on offense. Magana, a 6-3, 305-pound guard, will anchor a line that will include juniors Mike Gnezda and Grayson Maday, and sophomores Jack Doyle and Jon Schmitz.

Clifton, a receiver, will be expected to spark a passing game that has yet to settle on a quarterback between senior Matt Mindak and sophomore Cameron Thomas. Mindak boasts more experience, while Thomas is a physical specimen, standing 6-3, 180 pounds.

There’s considerable buzz about Thomas, who has the ability to hurt foes with his arm and legs.

“From an offense standpoint, we’re way ahead of where we were last year,” Verde said. “The kids have a year under their belt understanding and executing our system.”

The defense boasts a tad more experience. Senior Jared Rogers returns at strong safety. Not only is he a menacing presence in the secondary, the young man is an excellent student, boasting a 4.0 grade-point average.

“Jared has all the tools,” Verde said. “He’s physical, fast and is a great student. We’re expecting a big season out of him.”

Verde also is expecting major contributions from linebackers Kyle Taylor, a senior, and Montreal Blade, a sophomore. Another sophomore, Warren Allen, looks to make an impact at end.

Verde is stressing his team gets off to a strong start. The Spartans’ first two games are against Hyde Park and Shepard, before road-tripping to perennial power Marian Central.

“Those first two games are huge,” Verde said. “We’d like to get some momentum going and some confidence as we get into conference. It doesn’t help that our conference is extremely difficult.

“We feel like we’ll have more fight in us, but with the young comes mistakes. We’ll have them prepared. They have to believe they belong on varsity.”