Henricksen: A whole lot better than they thought

A host of teams around the Chicago area have high hopes and expectations for the 2014-2015 season. The development of an individual player this offseason, however, has raised the stakes. 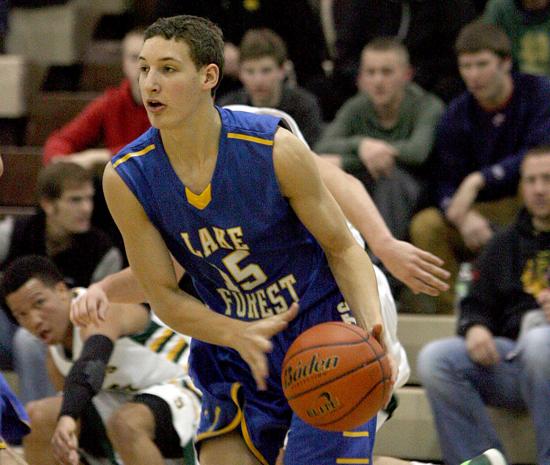 The development and rise of players in the offseason isn’t just a boon for the individual prospect in search of landing a Division I scholarship –– or eight. Imagine how high school coaches feel when they start hearing how their “role players” and underclassmen are turning heads on the AAU circuit?

Here are a host of top teams that will be even better than expected with the improved play of certain players during the offseason.

Then: Expectations were going to be sky high with the return of highly-productive Division I prospect Evan Boudreaux and a surplus of experience returning from a 22-win team. The returning 2014-2015 team had the potential to be the best Scouts team since the Matt Vogrich-led team won 23 games and the first conference title in 20 years in 2009.

Now: The sudden rise of Noah Karras this summer from a 7 points-per-game shooting guard as a junior to a Division I prospect came out of nowhere. The impact of Karras and the offensive punch he possesses heightens the hopes for the Scouts and draws them closer to league and state favorite Stevenson.

Then: After falling to Whitney Young in the sectional final in March to end a four-year run as state champs, everyone agreed the Wolverines were set to return to elite status this coming season. Illinois-bound D.J. Williams, 6-6 senior Ed Morrow and 6-4 junior guard Zach Norvell are all returning high-major prospects.

Now: Most outsiders didn’t see the emergence of promising Isaiah Moss coming this fast. The 6-5 wing looked the part of yet another potential high-major prospect with his play in July, which gives an ultra-talented team that much more firepower. That's a collective groan you hear from teams with state title aspirations knowing Simeon has the summer circuit's biggest stock riser.

Then: Following a 27-win season that ended in a super-sectional loss to Morgan Park, the Bengals were immediately penciled in as a no-brainer top 10 team in 2014-2015 with dynamic Luwane Pipkins returning.

Now: James Jones was a budding prospect but still a sleeper throughout last season and heading into the offseason. Now the 6-3 junior is a bonafide mid-major prospect and, more importantly, a big-time complementary scorer to Pipkins.

Then: With key pieces returning, led by veteran Matt Rafferty, the program couldn’t wait to get a jump on the 2014-2015 season after winning 23 games and a regional title. With a go-to player like Rafferty and a few key returning perimeter players, the Red Devils look to be the favorite in the West Suburban Silver.

Now: It’s taken time for George Kiernan, a versatile and athletic 6-6 forward, to get his feet wet and stay healthy since transferring from Nazareth Academy prior to last year. An impressive spring and summer showed how big and dangerous of a weapon Kiernan can be after missing the majority of his junior season.

Then: There were some heavy losses to graduation –– the heaviest of any team in the state –– but the “rebuilding” word was never to be used. The big stars have departed, but the return of Division I prospect Skyler Nash, a 6-4 junior, and starter Rodney Herenton would keep the Dolphins afloat in the city.

Now: A pair of sophomore guards, Lucas Williamson and Willie Herenton, provided a glimpse this offseason of why the Dolphins have a chance to reload rather than rebuild. Williamson will help pick up some of the scoring slack that departed, while Herenton will slide in and provide quality point guard minutes.

Then: Although the Raiders won 21 games and a Southwest Suburban Blue title, an upset loss to Geneva last March in the regional final left a sour taste. But the return of high-scoring guard and Colorado State recruit Prentiss Nixon kept expectations high for this season.

Now: A running-mate for Nixon in the backcourt has emerged, with skilled senior combo guard Broderic Thomas showcasing playmaking confidence and scoring ability throughout the summer. Thomas has gone from an unknown to a capable weapon, which means the Raiders hopefully now have the type of backcourt to handle the rigors of March.

Then: After a season in which the Mustangs won a regional title and 21 games, Northwestern-bound Vic Law and Catholic League South Player of the Year Dominique Matthews graduated. But Kentucky recruit Charles Matthews was returning for coach Gary DeCesare, keeping the window open for this up-and-coming program.

Now: While Matthews is the unquestioned star, the spring and summer provided an opportunity for point guard Armani Chaney to emerge. Chaney, a bundle of talent who will help offset the scoring lost in the backcourt from Dominique Matthews’ departure, continues to better blend his scoring and playmaking ability.

Then: Despite battling a surplus of injuries early last season, the Saints managed to win 18 games behind the guard play of leading scorer Dom Adduci and versatile 6-5 forward A.J. Washington. But even with Adduci and Washington graduating, the Saints returned enough talent, led by point guard Cole Gentry, to challenge for the top spot in the Upstate Eight River in 2014-2015.

Now: While Gentry will be the catalyst, the reason coach Pat Woods has a team that can compete for a league title and possibly surpass 20 wins is the rapid improvement of 6-8 senior big man Jack Bronec.

Brother Rice’s Luke Moustakas, a big man who can space the floor with his shooting, picks up an offer from Northwes… https://t.co/8OoygiJR3g

Talented Jalen Quinn of Tuscola, one of the top juniors in the state, picks up an offer from Loyola.