The Illinois freshman-to-be led the 2013 golf tournament after the first round and advanced to match play. 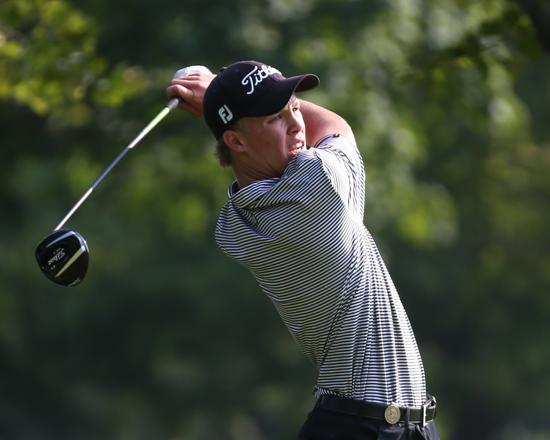 Nick Hardy hits a tee shot at the 2014 Western Amateur at the Beverly Country Club in Chicago on Aug. 2. | Allen Cunningham/for Sun-Times Media

Nick Hardy played in his first U.S. Amateur a year ago.

As a 17-year-old, he led the tournament, arguably the most recognizable amateur golf event in the world, after the first round of stroke play.

The Northbrook resident and incoming freshman at Illinois is back in the field again this summer, and he said he's more prepared.

This year's tournament runs Monday through Sunday at the Atlanta Athletic Club in Johns Creek, Georgia. The first two days feature a total of 36 holes of stroke play before the 312-player field is cut to the low 64 for match play.

"I feel like I am more ready this year," said Hardy, who lost in the first round of match play a year ago. "I know now that I can beat some of the best amateurs in the world, so that gives me confidence."

Hardy's belief in himself comes from his play this summer at some of the biggest tournaments in the country.

Earlier this month, he tied for third at the Western Amateur at The Beverly Country Club, ultimately losing to eventual champion Beau Hossler in the semifinals of match play. Hardy also tied for second at the Western Junior and was the runner-up at the Illinois State Amateur.

Even though he didn't win any of those tournaments, Hardy said each of the events has motivated him to work harder in an effort to finish first one day.

"I knew I could do this," he said of his summer. "These are great experiences, and it's something I believed I could do."

Hardy's work ethic also has contributed to his success.

Even on a four-day vacation to northern Michigan with his family last week, Hardy played golf every day.

"Ever since the weather got nice, I've prepared myself to be out there, playing 36 holes a day," he said. "I don't ever feel like I get tired on the golf course. I don't feel any fatigue at all."

Other Chicago-area players in the 312-player field this week are Arlington Heights' Doug Ghim, Wilmette's Charles Waddell and Lincolnshire's Jack Watson. Ghim, a graduate of Buffalo Grove and freshman-to-be at Texas, was the medalist at the Western Amateur and the runner-up at the U.S. Amateur Public Links.