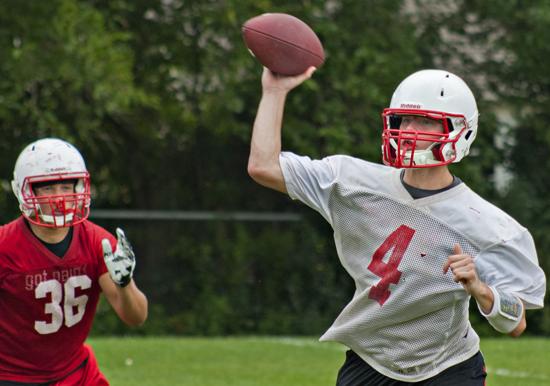 “I told all the guys that we need to get fired up,” he said. “It’s our last year so we’ve got to show up and give our best effort. I think we’re going to band together this year and do well.”

The Redwings had their first practice of the season Monday morning on campus before moving over to Benedictine University for conditioning work.

Benet started 11 seniors on defense last year, so there will be plenty of new faces on that side of the field this fall. Senior free safety Mac Cooney is one of the few returning players who saw action in 2013.

“It’s really exciting right now,” he said. “We’ve always been a close team anyway, but as a senior you move up the ranks a bit and you get that one final year together. So far, we’re coming together really well.”

Linebackers Brian Runger and Pat McCarthy also were thrust into action at times last year because of injuries, while junior Trent Kramer split his time with the sophomore team. Kelly also saw the field a bit, while Glen Kleinschmidt, Jack Stephens and Charlie Weidenbach also appear to be key additions.

“We were so senior heavy on defense last year and a lot of time with no one returning reporters think we’re automatically going to be bad,” Benet coach Pat New said. “I love it when you have guys develop as juniors and can plug them in as seniors. For the most part we’ll have new starters.”

Summer delivered a substantial blow when it was announced that senior quarterback Jack Beneventi, who had already committed to Iowa, was transferring to Fenwick. Sophomore Jack Sznajder, brother of senior running back Jack Sznajder (124 rushes, 833 yards, eight touchdowns), is expected to take over for Beneventi.

“It’s going to be a special season for my whole family,” Brad Sznajder said. “I have all the confidence in the world in my brother and I know it’s going to be a lot of fun to play with him.”

Benet is looking to qualify for the playoffs for the third consecutive year, which won’t be easy. The last two seasons have been special, even though last year was strange as the Redwings won their first six before losing four straight. They went 11-2 in 2012 after suffering through five consecutive non-winning years.

“It’s always a tough schedule, but we recognize that and respect all our opponents,” New said. “Downers Grove South is a big [Class] 8A program and O’Fallon has gone to the playoffs the past five years in 8A, and then the ESCC is going to be a challenge with Notre Dame to start.”