First day of practice: West Aurora wants to be a mover and a shaker

For coach Nate Eimer’s Blackhawks, 2014 also marks a return to the Upstate Eight Conference. They’ll play in the Valley Division after departing the DuPage Valley. 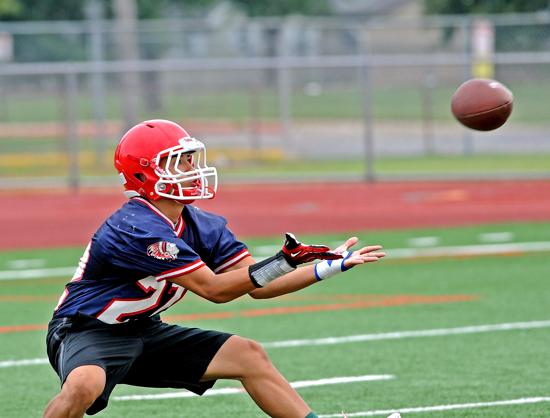 West Aurora’s Sean Anthony gets under the ball to make a catch during Monday’s practice. | Jon Langham/for Sun-Times Media

Players from West Aurora, like those in 549 other high school football programs across the state, kicked off a new season with Monday morning’s first practice in shorts, shirts and helmets. They’ll add shoulder pads Wednesday and full pads Saturday, easing into the routine.

For coach Nate Eimer’s Blackhawks, 2014 also marks a return to the Upstate Eight Conference. They’ll play in the Valley Division after departing the DuPage Valley.

It was time for a change.

“I don’t really think the kids are too caught up in it,” said the fourth-year coach, who is optimistic with four of five starters on the offensive line leading a large group of returnees from a 1-8 team.

“I think from Day 1 when I got here three years ago, we’re just trying to get better, just working at that. Whoever we play, we play.”

Since moving to the DVC from the Upstate Eight in 1997, West was a combined 0-51 against those three. And its streak of seasons without making the playoffs has hit 19.

The numbers don’t lie, and Eimer knows that. Wisely, he wants to look forward.

“What we were doing before, obviously wasn’t very good for this program,” he said. “You look at the statistics. I’m sure you can list ’em. It is what it is.

“I think for the kids (on this year’s team), what we’ve tried to sell is, it’s a new era, a new start. We’re not gonna talk about the past anymore. We’re gonna move forward.”

Crosstown rival East Aurora will again be a conference game. Due to league dictate, it will be played in Week 8 rather than the season opener as it has since the late 1990s.

Opening with East “always brought a little extra excitement to the kids,” said Eimer, quick to add it shouldn’t lose its luster.

“When you kick off like that (with a rivalry game), it’s kinda like — I hate to say it — but I don’t feel like anybody plays their best football Week 1. Later in the season will be more exciting, kind of like how it used to be.”

In the early years of the state’s longest running rivalry, the teams always met in the regular-season finale.

For now, Eimer is following the advice he gives his kids, focusing on the next week and not looking too far ahead.

“We can go five hours on Saturday, so we’ll have the regular three-hour practice in the morning then come back that night at 6 and scrimmage kick, kick return and punt teams to give those guys good live looks,” he said.

West added Geneva of the Upstate Eight River for the opener (Aug. 29 at home). Its second nonconference game follows at Plainfield East. Both were playoff teams last year.

“Geneva is a great fit for us because I think we’re gonna know right away where we’re at, who can play and who can’t,” Eimer said. “They’re talented, but we’re kind of used to that. This isn’t like new territory for us.”

There’s no denying that.

West’s nine opponents last year went a combined 54-41 and six of them made the playoffs.