The Royals will try to make the playoffs for the first time since 2007. 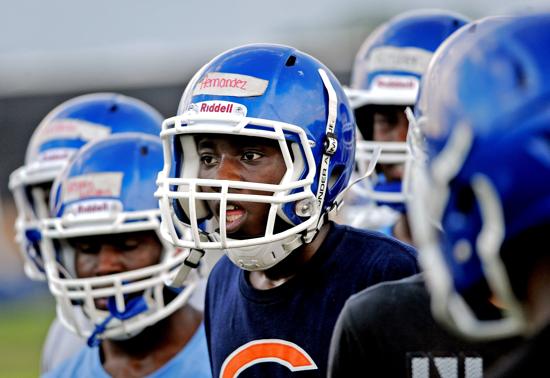 Larkin players went through the hectic first day of football practice Monday taking care of formalities like paper work, proof of physicals and the IHSA-mandated video on concussions.

They long ago had taken care of the most important task facing first-year coach Dragan Teonic: changing the direction of the program.

“It didn’t start that well,” said Teonic, a head coach for four years at Hersey before taking over the Royals following the resignation of Mike Scianna. “We had our summer program for about six weeks, but when we started I don’t know if they were used to bringing the kind of intensity they needed right away for offseason.

“After two weeks, there was a clear shift by the guys who wanted to be a part of this. You could draw a big, bold line then at the two-week mark. Some guys figured it out and others walked away, which was exactly what we wanted to have happen. We want those who are committed.”

Larkin eventually had consistently 50 to upper 80s in total player participation for its summer program, which ended two weeks ago.

Senior running back/defensive back Cameron Tomlin, whose father Tyrrell played for Elgin’s powerful teams of the early 1990s, sees positives coming out of the coaching conversion as the Royals try to make the playoffs for the first time since 2007.

“Defensively, we’re going to be a lot better,” Tomlin said. “We’ve been working more on techniques and have got a good feel for the game.

“Our attitude does have to get better. I saw it sometimes in practices during summer. We’re lethargic, and other days we have good days. We have go have some of the leaders step up.”

Teonic assembled a staff both familiar and unfamiliar to his players. The new offensive coordinator is Dan Sanders, a former line coach at DeKalb. He starred at St. Edward star and played with Teonic at Harper College in the 1990s. Lupe Coronado, Jesus Gonzalez, Nate Williams and Steve Knapp all have been Larkin coaches in the past. The staff also includes former Royals quarterback Jeff Saurbaugh.

“Conditioning is my biggest concern right now,” Teonic said. “Can we hold up over the course of the season?

“We’ve got some good athletes, but especially on the line, if we’re playing people both ways, we’ll be in trouble.”

Teonic, who plans to handle the defensive playcalling, doesn’t have a roster full of bigger players beyond Kordell Thomas, who is a very athletic 300-pounder, 255-pound Ty Former and 6-6, 220-pound volleyball player Victor Vyleta.

The offense is going to count on sophomore Elijah Hernandez, who has been a quarterback since seventh grade youth football.

“I’m a little bit nervous,” he admitted, “but I’ll be OK when I get some varsity experience.”

Monday’s first practice was merely the resumption of what Teonic saw all summer long.

“Honestly, for us, it’s going to be a lot of flat out hard work before we start to see results,” he said. “So far the group we have here has shown us they want to be workers.”