Matt Rafferty, a 6-foot-8, 215-pound center on the basketball team, made his official return to football Monday on the first of practice for the upcoming high school season.

“I’ve seen him play basketball. He’s a great basketball player, but we’re happy to have him,” Hartman said.

Rafferty’s return has opened the competition at starting quarterback between Rafferty and Thomas Ives. Ives, a 6-4 guard on the Devils’ basketball team, is the only one among Hinsdale Central’s five quarterbacks last season who was eligible to return.

It was Ives who helped convince Rafferty to come out for the football team. Rafferty, a senior from Darien, was the starting quarterback for the sophomore team and last played in the final contest of the 2012 season at home against York.

“I told Matt, ‘We would be a better football team with you,’ ” Ives said. “One of our plans is versatility. We can rotate at quarterback and wide receiver, which is not one of our stronger positions.” 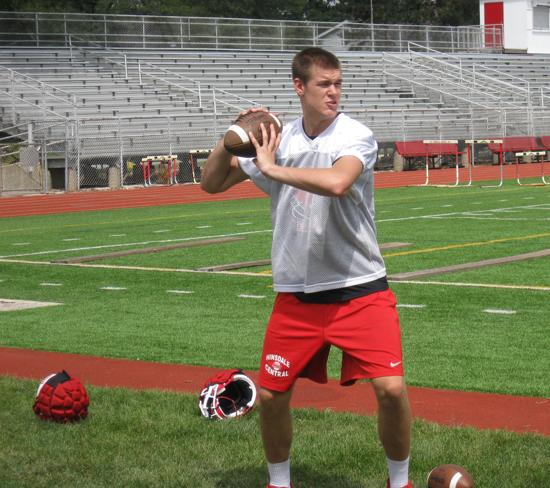 Rafferty quit football as a junior to focus on basketball. He helped lead Hinsdale Central to a Class 4A regional championship last season and played in the offseason with the Chicago LockDown AAU team.

According to Rivals.com, Rafferty has basketball scholarship offers from Loyola, Northern Illinois, Toledo and Illinois-Chicago. He said he is not close to making a verbal commitment and has not taken any official visits.

Since Hartman brought over a new playbook from Evergreen Park, Rafferty believes he isn’t at a disadvantage.

“Everyone is in the same position with a new coach,” Rafferty said. “The team is still learning new stuff and everyone is getting to know each other better. I [missed playing last season], but the time off was needed for me [to recover] for basketball.”

Before the summer, Hartman spoke with Matt Rafferty’s dad Brian about his son attending summer workouts while balancing high school basketball in June and AAU in July. During the busy AAU tournament season, Matt Rafferty missed some time with the football team.

His older brother Jason Rafferty was a starting junior linebacker for Hinsdale Central’s Class 8A state runner-up football team in 2008.

“Football is part of their family,” Hartman said.