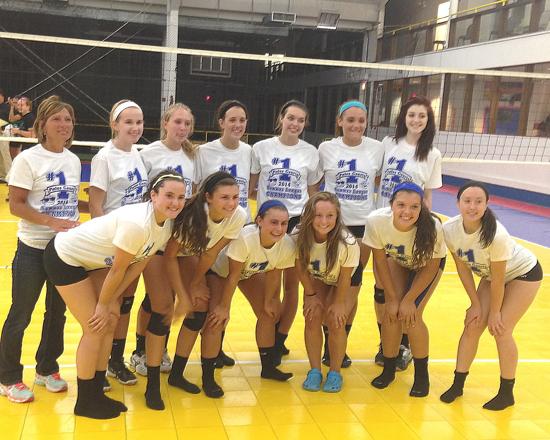 In something of a surprising finale, Lincoln-Way North defeated Providence 25-14, 25-20 behind three-sport star Valen Manns to win the summer league title at Palos Courts.

The Palos Courts Tuesday-Thursday Summer League provided more than a few surprises this summer, but none greater than in the season-ending tournament which saw Pool A top seed Lincoln-Way East and Pool B No. 1 Sandburg make an early exit.

Manns did most of the damage for Lincoln-Way North (13-1). The 5-foot-11 middle hitter pounded four kills during a 6-0 run that extended what had been a tenuous 11-9 lead in Game 1, then pushed the lead to 21-13 with an ace before Cappel closed the books on the set with a blast down the line.

Manns is coming off a three-month run which saw her high school soccer team finish fourth in the state and her club volleyball team – Ultimate 17 Gold – place fifth in the Premier division at AAUs. Manns was named an All-American in Orlando, Fla.

“She plays there sports – volleyball, basketball and soccer – and she’s excellent in all of them,” said Lincoln-Way North volleyball coach Mary Brown. “There are schools looking at her, but she has not made a decision yet. I don’t think she’s 100 percent sure yet between volleyball and soccer.”

Providence (11-3) was down 15-11 in Game 2 before rallying to tie at 17-17. But Cappel broke the tie with a kill and Ally Morrow chipped in with a pair of her own to extend the lead to 23-19. The match ended on a Kylie Snyder kill and a Providence hitting error.

“I lost four seniors and have three returning starters who aren’t here tonight,” Brown said. “My libero is in a back brace, my other setter is in North Carolina at 10-day medical summer camp and my other middle is at softball nationals. But I talked to other coaches and they’re all missing a player or two.”

“I’m just thrilled to win this,” Brown said. “I have a lot of great players, a lot of great athletes, and I really don’t have a hole in the lineup. Every year it seems like there’s one or two spots missing. This year, I don’t feel like I have any holes.

“It’s just making them a team. Anybody who coached volleyball will tell you, you can have six of the best athletes, but unless they work well together it won’t matter. That will be my challenge. Getting them to work well together and figuring out the puzzle.”

***
If Providence coach Rachel Ellingson was disappointed in her team’s effort against Lincoln-Way North, she didn’t show it. Maybe, like her players, she was just too darn tired.

“I can’t complain,” she said. “The girls worked hard. They did three hours of camp earlier today. That’s not an excuse. But four games in a row is really hard on them physically.”

“They really did a good job tonight,” Ellingson said. “My hitters (including juniors Emily Baggetto and Katie Compagno and seniors Tess and Grace Barrett) are starting to understand that they need each other, especially in times like this tournament and things like that where I can count on all of them.

“And I have some great backrow players (including libero Cory Griffith) and two great setters (juniors Rachel Alles and Liza Ellingson). One is a little more experienced than the other. But I’m happy where we are, happy where we ended up tonight.”

Ellingson also sent kudos to the Palos Courts staff for ensuring a smoothly run league and even smoother – if not fatiguing – season-ending tournament.

“What they do here is great,” she said. “It’s great not only to see what you have as a program, but what other programs have, especially if you’re going to be playing them throughout the season. Kathy (Steel), Gerard (White) and Adam (Beck), it’s a lot of work for them, too. We appreciate them putting this on.

“It’s always great competition, always a lot of fun. The girls enjoy it. They get to play a little more than your 25 days of practice that you get. They like to come and show their stuff. Overall, I’m pleased with how the summer went.”

***
The season-ending tournament was not fun for everybody. But it wasn’t full of doom-and-gloom stuff, either.

Sandburg coach David Vales watched his team come up short in the semifinals against Lincoln-Way North despite the return of setter Sami Knight, who sat out the Eagles’ three-set victory over the Phoenix in pool play earlier this summer.

One of the areas hit hardest by graduation last spring was Sandburg’s backrow, which saw Kelly McGovern and Alyssa Kijewski depart.

“One of the things we are missing is defensive specialists,” Vales said. “We have some young bodies back there. That was the difference. You could see when the ball went up in the air there was a little bit of that ‘deer in the headlights’ look. You could see it against Shepard and Lincoln-Way North.

“Lincoln-Way North was smoother. They knew where people were going to be and we didn’t have that. So that’s just something we’ll have to get together once the season starts. I’m not too worried.”

***
De La Salle was more bull in a China shop than deer in the headlights this summer. That is, until its semifinal meeting with Providence.

“They took us out of our rhythm,” Marassa said. “They tipped and rolled us. They totally deflated us. We were neck-and-neck in Game 3, but they served aggressively. I wanted us to keep up our intensity, but I think we went off (track) a little bit.

“Natalie (Arredia) did an excellent job setting the offense, and we have some seasoned players. A couple of things just didn’t go our way. Things weren’t falling that normally fall. They were scrambling and their scrambling was working where out scrambling wasn’t.”

Nevertheless, De La Salle, which finished the summer league at 9-4, has a very good chance of advancing deep in the state tournament this fall behind veterans like Kyra White, Kelly Lewis, Mary Kaye Byrnes and Carleigh Barringer.

***
Despite her team’s quarterfinal loss to De La Salle, Lincoln-Way East coach Linda Vivona saw a lot of positives from her Griffins this summer. Like a 10-0 record through pool play which included only two games dropped, and a 25-13, 25-12 victory over Andrew in the first round of the playoffs.

“I think we have a lot of depth and potential,” the veteran coach said. “I think that we just need to continue to work hard in order to get things clicking. Right now, we’re definitely still in the working phase.”

Two players who appeared to be in mid-season form were 6-1 junior middle Sarah Dobrich and 5-7 junior outside hitter Carly Collins.

“We just need to be able to bury a ball. They (De La Salle) had a few girls who could put a ball away and we did not. We had a lot of ‘keep the ball in play’ shots which are nice, but not at the varsity level. We need to have someone put away a ball.”

So how did it work out?

“I have a lot of seniors who are going to be good,” Zogata said. “It’s an experienced team. They stay pretty calm.”

Imagine how much better they will be with a little guidance from the sidelines.
Zogata’s senior-laden group includes middle hitter Arianna Ziogas, outside hitter Blair Cremerius, defensive specialist Tess Canon, setter Shae Millinowisch, and libero Haley Suillivan, who played club for the 1st Alliance 18 Black team that finished second at USAV nationals in the USA division.
But most eyes in Lemont this fall will be on a junior –Olivia Whittingham. The 5-11 outside hitter played club this past season with 1st Alliance’s top 16s team.

“Olivia is just a really great athlete,” Zogata said. “She just still has a lot to learn. She’s not experienced as all of the other kids because she needed to  decide what she wanted to do and decide if she really wanted to make a go of this (volleyball).

“But she’s really set her mind to doing it, so I think with the experience of the other girls and her continuing to learn, we’ll be in good shape. She improved a lot over the club season, as did all the other girls.”

***
Seven area players have recently announced their college commitments, according to John Tawa of Prepvolleyball.com.

Also, Becky Breuer, a 5-10 senior outside hitter from Waubonsie Valley and Club One, has committed to Emory University in Atlanta, while Jane DeJarld, a 5-9 junior setter from Mother McAuley who plays for Michio Chicago, has committed to Boston College.

Maddie Jaudon, a 5-7 senior defensive specialist from Batavia and Sports Performance, has announced her decision to attend Elon University, while Kayla Caffey, a 6-foot junior middle blocker from Mother McAuley and Michio Chicago, has committed to Missouri.

Also, Ginger Perinar, a 6-foot junior outside hitter from Minooka who plays for Uno Volleyball Club, has committed to Southern Illinois.