The Knights will heavily rely on their seniors. How heavy? Nineteen seniors likely will nail down starting positions. 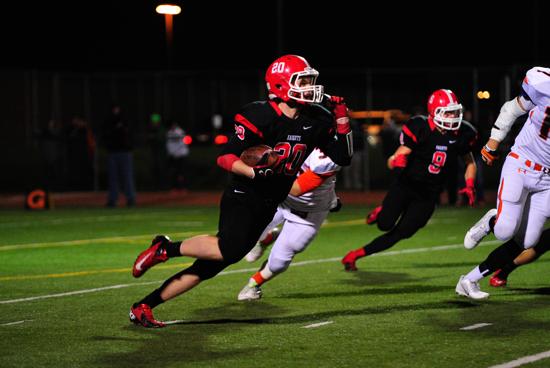 With a new coach and predominately juniors in the lineup last season, Lincoln-Way Central was expected to experience some bumps in the road.

That the Knights did, going 1-3 before finishing with a 4-5 record.

A year older and wiser, Central coach Hud Venerable is confident his players will apply the lessons learned in 2013 to produce a successful ’14.

“We played a lot of kids and gave a lot of kids opportunities last year,” Venerable said. “They’ve been through it now and are ready to take it to the next level.”

The Knights will heavily rely on their seniors. How heavy? Nineteen seniors likely will nail down starting positions for Venerable.

With an abundance of skill and experience at the skill positions, Venerable has implemented a spread offense this season.

“We looked at our kids and our program and felt like we had the type of kids who can flourish in an offense that is more of a spread look,” said Venerable, in his second season as coach at Central. “It’s a faster tempo, and we’re going to throw the football a little more.

“Campbell has had a great offseason and summer. He’s a dual threat. He’s smart, tough and is a good leader. We like our receiving core. Studer, when he was healthy (foot injury), had some big games last season. We need to keep him healthy.”

There’s a reason the O-line is entirely new. Venerable made the decision to shift two-year O-line starters Bryan Ditchman and Jake Ruzas, along with returning starter Sean Kelly, to the defensive side. Ditchman, a junior, and Ruzas will play on the D-line, while Kelly will play linebacker.

“We feel we have the guys on the offensive line to step up and get first crack at being starters,” Venerable said. “This also helps our defense.”

Justin Markus, Marc Veihl and Justin Strilko will anchor a secondary that will include Cam Post, who earned some snaps at quarterback last season.

“We have a nice core on defense, especially up front,” Venerable said.

Venerable is confident the Knights can avoid the slow start that put his team in a 1-3 hole in ’13. A bounce here or there and Central could have avoided heartbreaking losses to Lincoln-Way East (a 17-12 final), Andrew (14-7) and Lincoln-Way North (22-21).

Central opens the season Aug. 29 at Sandburg before welcoming Lincoln-Way East to New Lenox in Week 2.

“Being competitive will not be good enough this season,” Venerable said. “Our sights are set on winning the conference championship and going deep into November.”