The summer is a critical stretch for high school wrestlers. 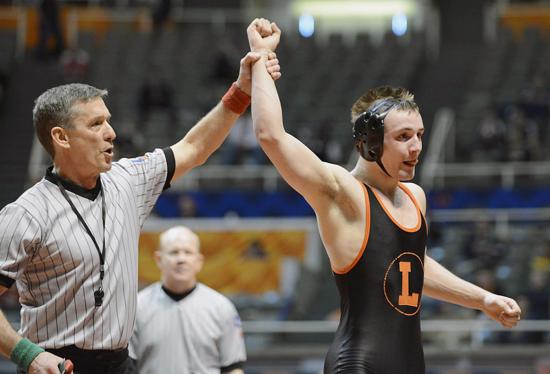 The summer is a critical stretch for high school wrestlers.

“You can have a very good experience wrestling November to February and get a lot out of it, but in terms of competing well at the state level and [drawing interest] for a college scholarship, it’s an absolute must,” Libertyville coach Dale Eggert said.

This was a particularly important summer for the Wildcats as they lost all but one state qualifier — Joey Gunther — to graduation. Highlighted by solid showings at the University of Illinois team camp and the Junior National Greco-Roman and Freestyle Tournament in Fargo, North Dakota, it turned out to be a productive time for Libertyville.

“The Illinois camp was a great team-building experience,” senior Mark Dunsing said. “We lost a lot of experienced guys and we were able to learn a lot about ourselves.”

Sophomore Jack Damenti was Libertyville’s top wrestler in Champaign with a 13-2 record on his way to an individual title. Freshman Tyler Padilla dropped his opening four matches, but won 11 in a row before losing in the finals.

Senior Jordan McInerney and incoming freshman Will Bertaud each placed second. In third for Libertyville were seniors Dan Vickers and Dan Schilling and junior Nick Kraus.

“Jack was the standout guy,” Eggert said. “He beat some really good guys, [including] state qualifiers.”

Damenti said he was motivated to improve following his freshman year.

“It was a humbling experience,” he said. “I lost some matches at the junior varsity and varsity level.

Damenti struggled early at the junior varsity level but he improved throughout the season and ended up winning the NSC tournament title at 138 pounds.

“I put too much pressure on myself early,” he said. “I was a lot better when I went out there without a lot of stress.”

He said the Illinois camp set a good tone for the upcoming season.

“We didn’t know each other as well going into it and it was a great way to be around the guys,” he said. “We worked hard and had a lot of fun together.”

In North Dakota, Gunther went 6-1 in the Greco-Roman competition. His only loss came on a tiebreaker in the semifinals. He finished third out of 67 competitors in the 152-pound division. Dunsing was 3-2 at 220 pounds.
In freestyle, Gunther was 3-2, Dunsing 2-2 and graduated senior Steve Polakowski reached the quarterfinals (126 pounds).

Gunther also represented Illinois at the Junior National Duals in Oklahoma City. Six of his seven victories were by pin or technical fall and he advanced to the semifinals.

“Joey is a very experienced wrestler and his [performance] did not surprise me,” Eggert said. “Both Joey and Mark have a come a long way. They are very dedicated wrestlers.”