After Barrington Post 158 began the American Legion season with an 8-6 record, coach Nate Gray said the team went on a “nice run.” 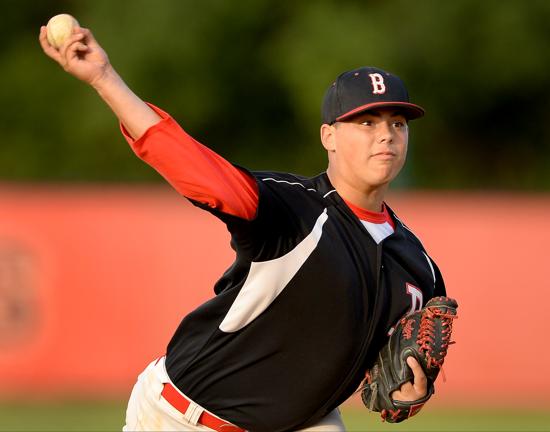 After Barrington Post 158 began the American Legion season with an 8-6 record, coach Nate Gray said the team went on a “nice run.”

Gray may be in his first year as the team’s coach, but it’s clear that he’s already talking with the understatement of a veteran. That nice run featured Barrington ripping off 33 victories in 34 games.

That propelled Barrington to its ninth state title — the most in Illinois — but its first since 1995. On that 1995 team was none other than the team’s biggest fan, Pat Wire. Wire, Barrington’s varsity baseball coach, coached the American Legion team the past four years before stepping down because his wife was expecting the couple’s fourth child.

He didn’t have to look far to find his replacement. Gray was his college roommate and an assistant varsity baseball and football coach at Barrington. He also is a coach at Professional Baseball Instruction of Illinois in Lake Barrington.

“I think that Nate and his assistant Chris [Holke] got those guys to play selflessly every single day,” Wire said. “It was guys playing out of position for a common goal. It’s just a cool story.”

Wire said that Gray is a top coach with a particular affinity for teaching hitting.

“He does an amazing job with articulating what I think is the most difficult thing in sports, which is to hit a baseball,” Wire said. “The guys really buy into his [coaching].”

Barrington’s season came to an end at the Great Lakes Regional Tournament in Terre Haute, Indiana. Barrington lost 3-0 to a team from Ohio Aug. 7 and 6-4 to an Indiana foe on Friday.

Gray said he was fortunate to coach this collection of players in his first year leading the program.

“This group was outstanding,” he said. “It’s easy to coach when you have a talented and athletic team that can hit and pitch.”

To a man, the Barrington players said this was a special season.

“It’s like no other team I’ve played on,” pitcher Jack Covek said.

One player who almost missed out was pitcher/infielder Brad Powell, who came very close to focusing exclusively on his golf game this summer. In the state championship game against Galesburg, Powell pitched four critical, scoreless innings in relief.

“This was truly a team that was worth coming back for,” he said. “Everyone played together and fought for one goal, and that’s something you don’t always see.”

“I had two grandfathers who served in the military and it’s a great way to honor the people who have fought for our freedom in the past, present and future,” he said. “It’s a small way that we can give something back to the community.”