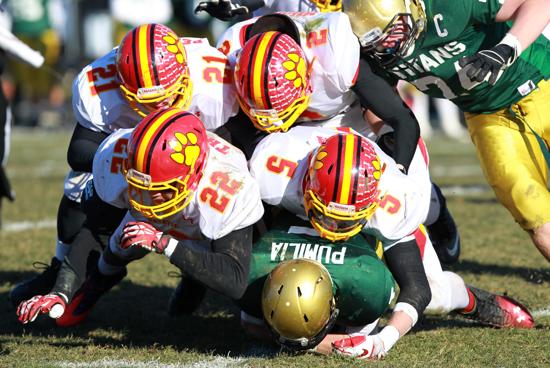 Jake Hlava (5) will return at outside linebacker for Batavia this year. | Erik Anderson/For Sun-Times Media

One of the enduring images of the 2013 football season came on the very last day during the Class 6A final at Huskie Stadium in DeKalb.

No one was quite sure how fans would take to the first IHSA championship games played at Northern Illinois. But one look at the home grandstand — and the sea of red and gold-clad Batavia supporters — answered any question about whether NIU would be a popular venue.

The Bulldogs gave their crowd plenty to cheer about, rolling past Richards 34-14 for the school's first football state title. Some key pieces of that team have moved on — quarterback Micah Coffey (now playing baseball at Minnesota), running back Anthony Scaccia and defensive mainstay Michael Moffatt among others.

But there are enough holdovers for the Bulldogs — No. 25 in the Sun-Times preseason Super 25 — to have some big dreams for 2014.

"It's a lot to live up to," senior Noah Frazier said, "but we're up to the challenge. No one wants to be the team that goes down [from previous heights]."

Frazier, heading into his third season as a two-way starter, figures to play a big role in whatever success the Bulldogs enjoy this fall.

The 6-foot, 220-pounder and fellow senior Josh Leonhard (6-2, 225) give Batavia a pair of bookend defensive ends who can cause no end of havoc for opposing passing games. Frazier had a school single-season record 13 sacks a year ago, one more than Leonhard.

Frazier also will be moving to fullback to help fill the void created by the graduation of Scaccia, who set school records for carries (279), rushing yards (1,913), rushing touchdowns (28) and total TDs (35) last season. A back more in the mold of the small and speedy Scaccia is senior Blake Crowder (402 yards, 5 TDs).

"We're as good up front as we've ever been," said Batavia coach Dennis Piron, who is 34-3 through three seasons.

The race to replace Coffey at quarterback is still on, between senior Evan Acosta and junior Kyle Niemiec. "They've been battling all summer," Piron said. "I think we won't make a final decision [on a starter] till the week of the first game."

Whoever winds up behind center will have some help, both in the backfield with Frazier and Crowder, and in the receiving corps from players such as Canaan Coffey (Micah's brother) and Peyton Piron (the coach's son).

The Bulldogs will get tested early, with nonconference games against 8A powers Oswego and Glenbard North the first two weeks.

But Dennis Piron doesn't see a lot of worry in his players' eyes.

"The kids want to make their own mark, make their own legacy," he said. "At some point, I thought there might be some pressure. But they're not showing it."