Oswego has dominating its own little corner of the high school football world down pat. Now the Panthers are setting their sights a little higher. 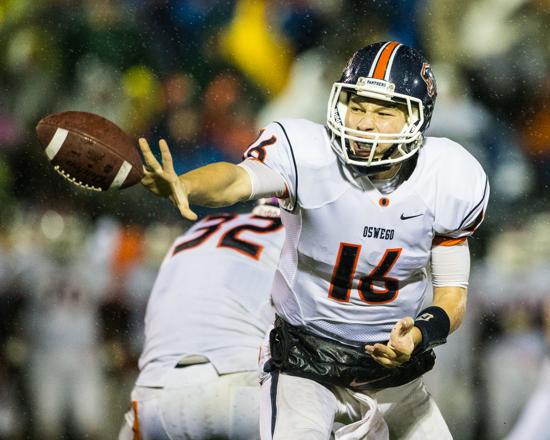 Oswego has dominating its own little corner of the high school football world down pat.

Now the Panthers are setting their sights a little higher.

That includes coach Brian Cooney, who heads into his third season not having lost a Southwest Prairie Conference game.

Oswego, ranked 22nd in the Sun-Times preseason Super 25, is 21-0 in conference play in the last three seasons but only 1-5 in nonconference games. The losses haven’t been against slouches — three were to Waubonsie Valley, a team the Panthers did come back to beat in the second round of the Class 8A playoffs last season — but they were against the kind of teams Oswego would have to beat in November.

And this group of Panthers might have the personnel to go toe-to-toe with some of the big-school powers.

‘‘We’ve got a bumper crop of linemen,’’ said Cooney, who is used to seeing that. ‘‘I went to school in Oswego, and we always used to turn out big, physical, thick linemen.’’

The big guys will provide plenty of protection for junior quarterback Steven Frank (6-4, 210), who already has scholarship offers from Illinois and Miami of Ohio, among others. He threw for 1,950 yards and 27 touchdowns with only 10 interceptions in helping the Panthers reach the 8A quarterfinals.

‘‘He’s progressed tremendously from sophomore to junior year,’’ Cooney said. ‘‘The amount of work he put in in the offseason, his mechanics are better [and] his arm strength is better.’’

Frank has some capable receivers in junior Joe Hennessy (6-4, 195) and senior Ryan Hennessy. But don’t expect Oswego to be pass-happy this fall.

‘‘Even though we’ve got a quarterback who can chuck it a little bit, I would consider us a traditional ‘I’ [or] power ‘I’ football team,’’ Cooney said.

‘‘We should have a pretty solid running game,’’ Mikkelson said.

There is less experience on defense after some heavy losses to graduation, but there are some veterans in lineman Brennan Burdo (6-2, 225), linebacker Chad Marsh (6-0, 215) and defensive back Mason Memming, to name three.

And even if there aren’t a lot of full-time starters back, it’s not like the holdovers spent all of 2013 on the sideline.

‘‘Especially in our secondary and defensive line, we were able to cycle some guys through,’’ Cooney said. ‘‘A lot of them are coming back with some playing time.’’

Now the focus is on getting them some more playing time — and some early victories.

‘‘We’re pretty much through our evaluation [period],’’ Cooney said. ‘‘But I think some kids just need a game under their belt. We need some kids in live action.’’