Batavia more than ready to defend Class 6A title

Noah Frazier need only notice the signs around the Batavia community to remind him what his team accomplished last fall, and of the huge fan support the final day in DeKalb. 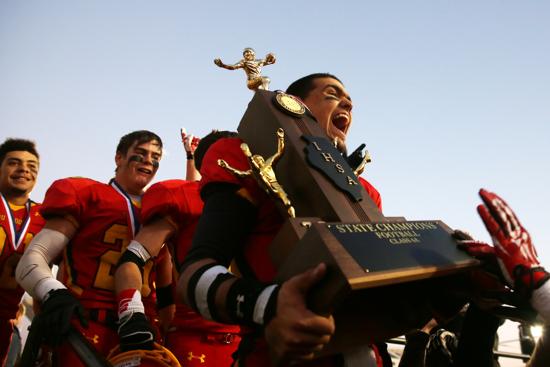 Noah Frazier need only notice the signs around the Batavia community to remind him what his team accomplished last fall, and of the huge fan support the final day in DeKalb.

Will the Bulldogs get fat off the memory of the school’s first football state championship?

“We celebrated and had a grand old time, but then it was back to business,” said Frazier, entering his third year as a two-way starter. “We had a taste of it, and we want to get it again.”

Speed on defense and brawn on offense will be a Bulldogs’ calling card.

“It’s nice to have your defensive ends back,” Batavia coach Dennis Piron said. “That’s a real good place to start.”

Behind those pass rushers are outside linebacker Jack Hlava, who had 74 tackles last season, and strong safety Nick Bernabei, who had 85.

Five starters are back on offense, notably up front where 6-foot-5, 285-pound senior Jack Breshears anchors a deep group of linemen. Mitch Krusz and Patrick Gamble are other returners off a unit that yielded just three sacks over 14 games.

Expect a heavy dose of ground and pound early on with a line heavy on quality and quantity.

“We are awfully deep up front,” Piron said. “We have depth at the position and our front-line guys have a tremendous amount of experience.”

Those people-movers will be clearing the way for new blood this fall, with workhorse Anthony Scaccia now at Butler University after running for 1,913 yards last fall. Frazier is moving from tight end to fullback to help fill that void.

“At this point we don’t have a clear starter,” said Piron. “Both kids have similar strengths, similar skill sets.”

It’s a confident team that welcomes the inevitable target on its collective back.

“If someone wants to circle us on their calendar that’s fine. I’m not concerned because these kids work so doggone hard,” Piron said. “They’ve earned the right to be confident.”

“We kind of have a chip on our shoulder,” said Frazier. “Last year’s class was phenomenal but we feel like we can do special things too.”