An inexperienced line on both sides of the football is where Dundee-Crown’s hopes for a second straight playoff berth could begin or end. 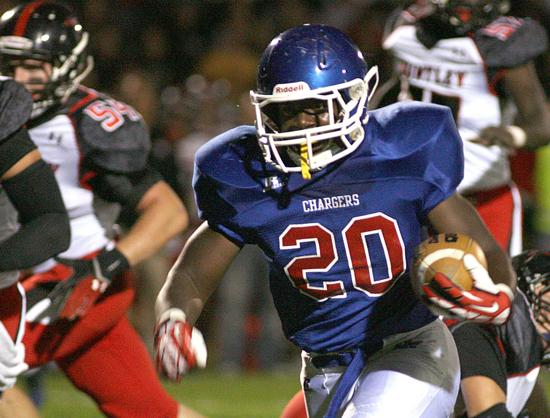 Dundee-Crown running back Caleb Parsons is hoping the Chargers' offensive line can help lead him to another successful season. | Joe Cyganowski/For Sun-Times Media

New Dundee-Crown football coach Mike Steinhaus knows the foundation for any team rests along the line of scrimmage.

While this year’s Chargers have plenty of experienced offensive firepower in running backs Caleb Parsons and Malik Dunner, receiver Kiwaun Seals and an experienced quarterback in Jeff Atherton, it’s an inexperienced line on both sides of the football where Dundee-Crown’s hopes for a second straight playoff berth could begin or end.

“Up front with the running game is the starting point,” said Steinhaus, who served last year as former coach Vito Andriola’s offensive coordinator. “Obviously we need to find the pieces of the puzzle with the offensive line because we’ve basically got only one guy returning.”

Junior tackle Josh Mosley is that returning starter and provides the size to catch college scouts’ eyes at 6-4, 300 pounds. Sophomore Gage Efken and senior Brett Peters at the guards, junior center Jake Kieltyka, senior tackle Jack O’Brien and juniors Adam Melle, Albert Putlak and Joseph Terry all figure into a line that will attempt to open holes for Parsons, who went over 1,000 yards last year.

“Caleb gets north and south quickly,” Steinhaus said. “I like all our backs in that way. They can be punishing runners too.”

Steinhaus noted the coaching staff worked on senior quarterback Jeff Atherton’s mechanics and he has become a bigger passing threat, especially with the 6-1 Seals returning at receiver. Seniors Austin Grand and Matt Michalski and junior Matt Wiechmann at wide receiver and tight ends Alonzo Alvarado and Matt Michalski are other potential targets.

New defensive coordinator Adam Lester has just three returning starters, but one of them is Dunner at safety. The Ball State recruit ranks among the area’s premier players. The other two returnees are senior defensive linemen Jarrod Raap and Zach Thelen.

The Chargers had to replace all three linebackers, but senior Brandon Brooks is a good start.

“Brandon has really stepped up as a linebacker in my eyes,” Steinhaus said. “He played mostly offense last year as a backup running back and still can play there or fullback, but he’s really relished the chance to be a senior starter and is playing fast and with an edge. He brings nastiness to the defensive side.”

“Obviously many of them haven’t played at varsity game speed, and things happen a lot faster in games than practice,” Steinhaus said. “Teams can have an explosive play and you have to trust the young guys to stick to their technique and not forget their coaching.

“These guys are doing a great job buying into what coach Lester has been coaching them.”