Westminster Christian enters Year 2 by going on the offensive

Westminster Christian will look to make a good-size jump in its second-year in the Northeastern Athletic behind a high-powered offense. 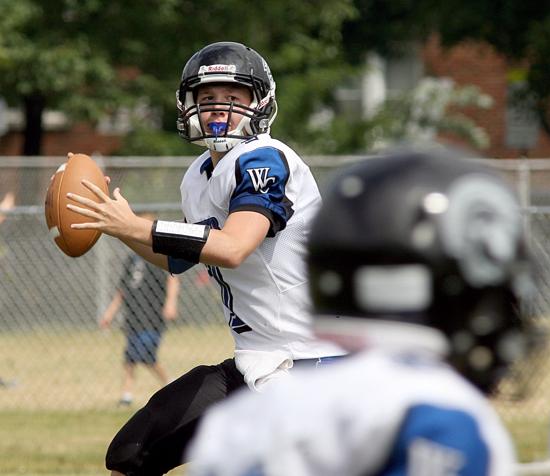 A year ago, Westminster coach John Davis couldn’t be sure exactly what he had as his team approached the program’s first-ever varsity football game.

Now at least Davis knows he has an offense, and if the Warriors’ defense can pull together the way the offense has in one season, there could be a good-sized jump made by a second-year program in the Northeastern Athletic Conference.

“That’s the whole key,” Davis said. “I know this offense is going to score points. We’ve got a lot of good kids. But it’s defense where we can make the most improvement.”

Returning senior quarterback Max Tucker (143-of-270, 12 touchdowns, 1,513 yards) returns and the 6-0, 170-pounder has been around the offseason camp circuit. Davis said he led the Warriors to victories over larger schools in 7-on-7 play, including wins over St. Charles North, Elgin, Streamwood, West Aurora and St. Edward.

“I mean last year, we had some kids playing who just turned 14,” Davis said. “So we will have basically the full team from last year but we’ll be bigger and stronger on both sides of the ball.”

Sudis, at middle linebacker, leads the defense, with DeMaira and Brown on the outside. Hawn and Aters and several of the offensive linemen and Graseman can flip back to the defensive line. The secondary includes Albrecht, Anderson and Graziano. On special teams, Davis’ son John, a defensive end/receiver, is a nationally honored long snapper for his age.

Depth could be a problem with only 22 players on the roster.

“I have to be concerned about numbers, but most of the other (Class 1A) teams we play have similar problems,” Davis said. “So I don’t think we’d be alone in getting tired by the end of a game.”

Davis last year had to play a JV schedule in addition to varsity, so his players lost a day of practice for the JV game. This year, there’s enough in the program for an underclass team without varsity JV players.

“We’re going to get about 25 percent more practices,” he said.

The Warriors’ defense also will have the chance to work with an experienced coordinator as former Larkin assistant Terry Schabert is their defensive coordinator.