With help from an untested but skilled sophomore class, Crete-Monee appears in position to remain among the elite in 2014. 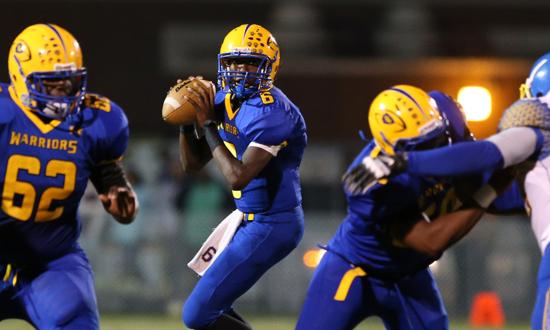 The star power may not be as prevalent at Crete-Monee as in recent years. Marquee names such as Laquon Treadwell, Marcus Terrell, Nyles Morgan and Lance Lenoir had already established themselves by the time they led the Warriors to the 2012 Class 6A state championship.

With the exception of linebacker Omari Stringer, the 2014 Warriors lack a veteran presence.

What Crete-Monee doesn't lack, however, is talent.

With help from an untested but skilled sophomore class, Crete-Monee appears in position to remain among the elite in 2014. The Warriors check in at No. 10 in the SouthtownStar Preseason Football Top 10.

"We're going to be young," Warriors coach John Konecki said. "We don't have the same star power. I'm confident we're going to be good, I just don't know at what level of good."

First things first: The Warriors are still deciding between juniors Frank Douglas and Clint Ratkovich at quarterback. Douglas, 6-2, 175 pounds, passed for 1,135 yards and 13 touchdowns in helping the Warriors to an 8-2 season.

When Douglas was injured during Crete-Monee's Class 6A first-round playoff game against Providence, Ratkovich stepped in and demonstrated great poise, though ultimately the Warriors fell short, 25-14. Konecki made it clear that whoever isn't under center will play another position.

"The difference between the two is that Frank is a better passer," Konecki said. "Clint is more of a Jordan Lynch type of quarterback; he's more of a runner."

As it stands, the 6-2, 215-pound Ratkovich will play on both sides of the ball. His versatility is a major asset.

To his credit, all Ratkovich is concerned about is winning. He'll play any position on the field as long as it helps Crete-Monee achieve that goal.

"It would be an honor to play quarterback, but I'll play anywhere coach needs me to play," Ratkovich said.

Whoever wins the quarterback battle will have a super receiving target in 6-2 Elijah Douglas, who amassed 482 yards in 2013. He'll be joined at receiver by a trio of sophomores: Marcus Kidd, Kevin Pate and Juwuan Treadwell, the younger brother of Warrior grad and current Mississippi receiver Laquon.

"We have young guys who are going to have to grow up fast," Konecki said.

Senior Phil Crews (6-1, 270 pounds) is the lone starter back on an offensive line that must mature in a hurry.

Defensively, the 6-4, 215-pound Stringer leads a unit that returns just two other starters in lineman Craig Smith (5-11, 300) and Ratkovich, who likely will play linebacker.

"We're untested but I feel we have enough firepower on both sides of the ball to make some waves," Konecki said.

The Warriors schedule is unforgiving, with six playoff foes on the docket. They open at home Aug. 29 against T.F. South before hitting the road in Weeks 2 and 3 vs. Evanston and Sycamore. The regular season ends with perennial power Prairie Ridge making a visit.

Until proven otherwise, Crete-Monee remains the team to beat in the Southland Conference. Since 2007, the Warriors have gone 35-1 in conference and racked up seven straight titles. Rich Central and Bloom appear to be the biggest obstacles to registering No. 8. Ratkovich, though, is confident the Warriors will extend their streak.

"The team is coming together very well," he said. "Everybody is focused and we have a lot of talent. The sky is the limit. It seems like we're going to have a great season."