Pioneer Press breaks down the area's girls tennis teams as the 2014 season approaches. 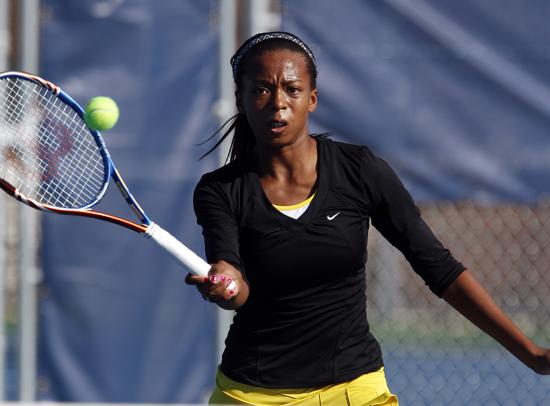 Brienne Minor is back with the Carmel girls tennis team this season. | File

The Buffalo Grove girls tennis team will welcome back all but four players from last year’s team that finished 10-4.

“You have to feel good any time you are returning that many strong players,” coach Kevin Schrammel said. “We’ve have a lot of good returning players, some kids who will step up from the junior varsity and a nice newcomer in Dasha [Ignatova].”

Senior Anna Klipstein is slated to play No. 1 singles.

“She’s extremely athletic and has the strokes to play with a lot of the top players in our conference [the MSL],” Schrammel said.

Junior Anna Sandler is likely to see time at No. 2 singles.

“She will do whatever it takes to win, even if she has to play for three hours,” Schrammel said. “She’s an absolute grinder and one of the most positive people on our team.”

Ignatova, a freshman, is expected to make an immediate impact at singles.

“She has the skills to jump right into the varsity lineup,” Schrammel said.

Carmel is coming off a 16-3 season and has plenty of depth and versatility. But the announcement that Brienne Minor will play for Carmel in her senior season gives the Corsairs an element of star power.

Minor, a Michigan recruit, played for the Corsairs as a freshman and sophomore before focusing on national tournaments as a junior. Her older sisters Kristina and Jasmine also played for Carmel and earned Division I scholarships.

“It’s great for any team to have a nationally ranked player,” Corsairs coach Chris Kannenberg said. “It’s nice to have her back.”

“She’s tall and serves very well,” Kannenberg said. “She hits big shots and is not afraid to come to the net.”

The senior doubles team of Christina Rao and Maddy O’Donnell will help set the tone.

“They’re the team captains and they’ve been working on their games all summer,” Kannenberg said. “They never give up and are willing to fight and battle. After [Rao and O’Donnell], the second, third and fourth doubles are pretty close, which makes practice great.”

“She has some hard-hitting ground strokes,” Wildcats coach Dan Kiernan said. “She is a very quick and athletic player who moves well on the court.”

Senior Ola Grabowski advanced to the state tournament in doubles last season. She is likely to see time at both singles and doubles.

“She prefers doubles but she always wins when I put her in singles,” Kiernan said with a smile. “She doesn’t hold back on her ground strokes; she just kind of goes for it.”

“They love to play together,” Kiernan said. “It doesn’t matter what the score is; they have the same mentality. They play smart and don’t make many mistakes.”

Coach Brian Packowitz likes what he sees from the Mustangs in early-season practices.

“We have a lot of athletes who decided they wanted to take tennis more seriously and worked hard in the offseason,” he said. “It is mind-blowing how much of a leap they have made.”

“She’s built up her consistency,” Packowitz said. “She already had a great serve and she’s more willing to come to the net.”

Junior Anne-Marie Arendt will be another key singles player for the Mustangs.
The team’s most improved player could be Lauren Ewing.

“She worked really hard on her aggressiveness and net skills; that was very apparent during tryouts,” Packowitz said.

Ewing probably will be paired with sophomore Jessica Peterson.

“Jessica is very aggressive and wants to win the point right away while Laura is more analytical and looks for her spots,” Packowitz said. “They complement each other well.”

Vernon Hills lost the majority of that team to graduation and will feature a youthful and versatile lineup.

Junior Leah Dosemagen and sophomore Olivia Jazbutis will be two of the Cougars’ top singles players.

“Leah is a smart player with the ability to execute her shots,” Vernon Hills coach Doug Gerber said. “Olivia uses her height (5-foot-9) to her advantage on her serve and has a good forehand.”

Gerber also expects some players who start the season on the junior varsity to earn time with the varsity before the end of the year.

When varsity coach Aaron Rogers elected to step back and coach the junior varsity this season, the Bears found a familiar face to lead the varsity.

Marcus Sipiera, who was the girls varsity coach for more than a decade before resigning in 2009 to spend time with his young family, is back on the court. Sipiera’s wife is taking the year off from teaching, which gives him the time to return to coaching.

“I enjoy getting to know the kids outside of school and working with them toward a common goal of winning and being the best that we can be,” he said.

Junior Brenna Casey is the favorite to play No. 1 singles.

“She’s hitting the ball the best out of all my players,” he said. “She’s become more patient and realizes you don’t have to crush the ball every time to win a point.”