Pioneer Press breaks down the area's boys soccer teams as the 2014 season approaches. 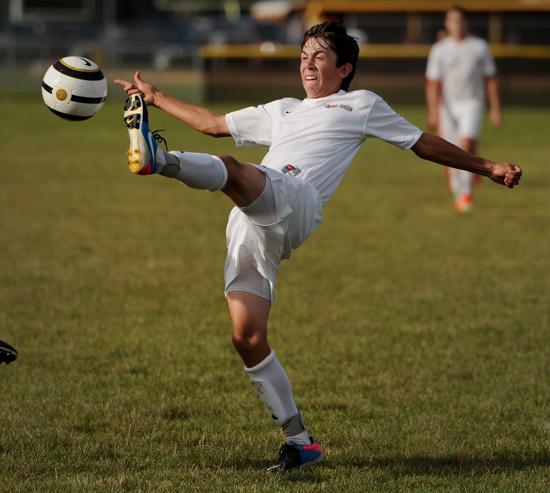 Justin Ehren will be one of the few seniors on the Carmel boys soccer team’s roster this season. | Brian O’Mahoney/for Sun-Times Media

A season ago, the Carmel boys soccer team was senior-heavy with 12 on the roster. In 2014, the makeup flips the other way as the Corsairs will only field three seniors.

“This is a young team,” coach Ray Krawzak said. “The season will hinge on freshmen and sophomores stepping up and showing they have what it takes to play varsity.”

One returning player with experience is senior Justin Ehren. A left back a season ago, Ehren will most likely play at the center midfield position this fall. He had a strong showing at the team’s summer tournament in Iowa.

“He proved he can be very effective in the attack and he’ll likely make things happen for us,” Krawzak said.

Other players expected to see significant action are senior captain and center back Jack Titterton along with juniors Ryan McKernan, Scott Cloe and Braco Lasso.

Like local rival Carmel a season ago, Mundelein’s 2014 roster is loaded with seniors. Twelve in fact, including midfielders Hector Ruiz and Lino Garcia and forward Armando Gomez. They will be the anchors of the Mustangs’ offensive attack.

“I think we have a competitive group this year. We have some very quality players that serve different roles for our team,” coach Ernie Billittier said. “Our senior leadership is going to be the key to our success.”

What point guards are to basketball teams, midfielders are to soccer squads. Good ones drive success. Lake Zurich may have the two best midfielders in the NSC Lake in Ian Murray and Jack Abry, both seniors.

The Bears suffered five one-goal losses in 2013. If they change that in 2014, a conference title is a strong possibility.

After a poor 2013 regular season, the Bison caught fire in the Class 3A playoffs, earning a sectional final berth. This fall, Buffalo Grove returns one of the Mid-Suburban League’s most talented goal scorers in senior forward Zach Masciopinto. He’s scored 15 goals in two varsity seasons.

Senior Mike Kotlyar will direct the midfield for the Bison.

In his first season as coach in 2013, Mike McCaulou directed the Cougars to a Class 2A regional title. He had the benefit of 12 seniors on the roster. The team’s makeup in 2014 will be much younger.

“This is a completely different team than last year. Everybody will bring something special to the team,” McCaulou said. “We don’t have a single best player, we play as a unit always.”

The Wildcats graduated their two best offensive players in forward Lloyd Chatfield and midfielder Nick Vogel. This season, the Wildcats might build around defense.

“He’s [Muchmore] one of the better goalies,” said Andy Bitta, who is entering his 30th season as Libertyville coach. “Our team has a lot of depth. We hopefully can challenge for the conference.”

“[Moore is a] physically dominant player, as good a one-on-one defender as I have ever coached,” coach Rob Parry said. “[He’s] probably one of the top 10 defenders in the state.”

Moore is part of a senior class that went 15-2-2 as sophomores. Another member of that class, forward John O’Connor, returns after scoring eight goals in 2013. Junior Keegan Kullby takes over the top midfielder spot. Matt Moderwell, a junior forward, is not likely to play for the Scouts this season, instead electing to train with the Chicago Fire Academy.

“I think we have talent, depth, balance, without really having any superstars. I think we can win the division again and a regional championship,” Parry said.

Longtime coach Elliott Hurtig is returning to the Warriors after a year teaching abroad.

Deerfield’s hopes of reversing a two-season losing trend will ride on the feet of Charlie Kogan. An all-CSL forward, Kogan is a potential 15-20-goal scorer for the Warriors in 2014.

“[Kogan] has great size and finishing ability. He comes into camp in incredible shape,” Hurtig said.

“This team is hungry and has a great sense of commitment and community,” Hurtig said.

Based on returning starters, the Giants are an early favorite in the CSL North. Nine players are back in 2014, led by three-year varsity player Omar Rodriquez.

The senior defender is fresh off a strong club season with Trebol FC out of Waukegan.

Seniors Zach Kohn, Tony Barrios, Carlos Pineda and Juan Marban give the Giants experience for a team Novotny believes can make a legitimate run in the state series.

Barrington graduates important seniors every year. But every season, younger players step up and the Broncos compete for a Mid-Suburban League title. In 2013, Barrington scored a championship trifecta in winning MSL West, regional and sectional titles.

The core of this fall’s group is expected to be Shawn Owen, Casey Slingo, Jason Frenk and Jack Harrington. Juniors Peyton Mohr, Ryan Lauderback and Hans Pallan could also vie for playing time.

Mark Schartner, who is beginning his 28th season, is one of the longest-tenured coaches in the area. In 2014, he may have one of his youngest teams. But Schartner will lean heavily on two talented seniors: midfielders Ethan Marx and Cobi Illian. Senior goalkeeper Jonathan Weissman also returns.