Midwest Orthopaedics at Rush and the Illinois Athletic Trainers Association are teaming with Accelerated Rehab to offer free knee screenings to high school athletes to determine their risk profile. 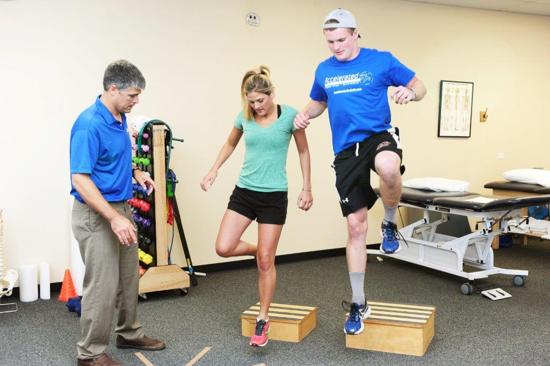 Libertyville senior Ellie Daugerdas hears it all the time from her high school soccer and travel teammates. They talk about how knee injuries happen to other players, not to them.

“A lot of kids have this ‘I’m invincible’ mentality,” Daugerdas said. “Personally, I felt that way.”

But in April 2013, while playing for the Wildcats, Daugerdas leaped in an attempt to win a 50-50 ball. On her descent, she landed awkwardly on her left leg. She felt a pop. An MRI revealed a torn ACL, requiring surgery. Later, doctors said her body structure made her more susceptible to the type of injury she suffered.

“Because of the way I landed, they could tell certain things, that my knee could give out,” Daugerdas said. “I didn’t think a [knee] injury would happen to me.”

That’s the idea behind the two-pronged, proactive approach being taken by Midwest Orthopaedics at Rush, a private Chicago-based group that specializes in sports medicine, and the Illinois Athletic Trainers Association this fall. The groups are launching a preventative education campaign called “Knees for Life,” complete with suggested exercises designed to help young athletes strengthen muscles around their knees. They are also teaming with Accelerated Rehabilitation Centers to offer free knee screenings to high school athletes to determine their risk profile.

“We want to be sure kids are protected as well as they can [be],” said Dr. Bernard Bach, Midwest Orthopaedic’s director of sports medicine.

According to a study by the American Academy of Orthopaedic Surgeons, nearly 400,000 ACL injuries occur in the United States every year. Midwest Orthopaedics said it has seen its ACL-related patients double in five years. For patients under the age of 25, that number has tripled.

Bach said he and other physicians perform about 600 ACL surgeries each year, with many of those patients being between the ages of 14-16.

“Those are the kids, the bundle of what we see,” Bach said. “The number has gone through the roof. It’s a real big deal.”

Max Mittelstadt is a sophomore quarterback at Hinsdale Central. He recently did a screening at the Accelerated Rehab facility in Villa Park. Under the supervision of a trainer, Mittelstadt was put through a series of exercises.

He jumped up and down from an elevated platform, performed knee dips and sprinted in a straight line, cutting quickly left and right. And although Mittelstadt was told he had a low risk of an ACL injury, he said he plans to take better preventative care of his knees.

“I’m going to stretch more, to make sure I’m loose and not tight,” said Mittelstadt, who also plays baseball. “You have to take the possibility of injury seriously.”

Sixteen months after her injury, Daugerdas still wears a brace on her left leg when she plays soccer. She said she is more diligent in strengthening both her knees and plans to have the brace off by November.

But Daugerdas said she doesn’t think her injury has had much impact on her teammates in high school or with her club team, Libertyville FC 74.

“I tell my soccer friends, ‘If you feel a little weak in the knee area, you may want to try this [exercise]’ or say, ‘You may get hurt,’ ” Daugerdas said. “A lot of them are like, ‘What are you talking about?’ No one believes it until it happens to them.”