Aspyn Repp, a midfielder and captain of the Eclipse Select Soccer Club U-17 team, recently made a verbal commitment to Northwestern. 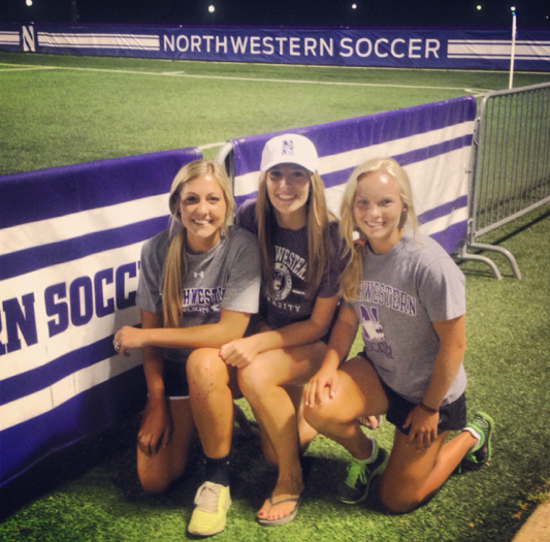 Aspyn Repp, a Libertyville resident and senior at Loyola, favors the sciences in school.

“I like how it’s pretty black and white,” she said.

When it comes to college soccer, Repp will be all about the purple and white. Repp, a midfielder and captain of the Eclipse Select Soccer Club U-17 team, recently made a verbal commitment to Northwestern.

From the first day she steps on the Evanston campus in late summer of 2015, she will feel more at home than the typical freshman. Not only did she grow up going to Northwestern men’s soccer matches, but the Wildcats team will have a distinctly Eclipse Select flavor. Repp, 5-foot-4, will be joined at Northwestern by teammates Hannah Davison and Kayla Sharples, both defenders.

“Not many people can go to college soccer and know they already have two great teammates and amazing people,” said Repp, who also seriously considered Duke and Notre Dame.

“It’s a very unique situation,” she said. “It will be exciting to play together for such a great school.”

Mike Nesci, the vice president of Eclipse Select, said that in Repp, Northwestern is getting a driven player who holds her teammates accountable and makes them better.

“She’s one of the best players at headers that I’ve ever coached, and that’s because of her will, desire and technique,” he said. “She’s an all-action midfielder who breaks up attacks for the other team. She’s always the hardest-working kid at training and in games. There’s never any question that she’s giving it everything she has. All her teammates respect her because of the way she approaches the game.”

Davison said Repp commands the middle of the field.

“She’s so aggressive; there’s no one else that plays the way she does and she’s even stronger off the field,” Davison said. “She never gets involved in any drama and just cares about the team playing well together.”

“One of my primary roles is to win the ball and I’ve always had that extra push to prove that I can physically compete with people,” she said. “I’m not considered a flashy player; I rely on hard work.”

Over the summer, Repp helped the U-17 Eclipse finish second at the Elite Club National League Championship in Richmond, Virginia. Eclipse Select lost 1-0 in the finals to the Dallas Sting. Two years ago, Eclipse Select also was the runner-up.

Repp and her teammates have one more chance — at the U-18 level — to bring home the national title.

“We would love to win it in our last year together,” Repp said.