Naperville North's Griffin Brown used his expertise to blow away the field in Tuesday’s McGonagle Naperville City Championship and help deliver the Huskies the team title at the six-team event. 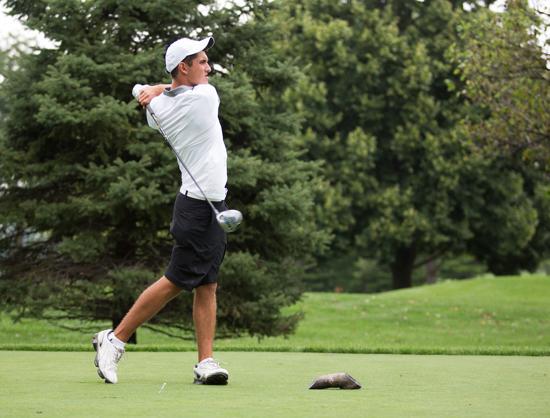 Naperville North senior Griffin Brown is quite familiar with Naperville Country Club, since his family used to be members at the 93-year old club.

Brown used his expertise to blow away the field in Tuesday’s McGonagle Naperville City Championship and help deliver the Huskies the team title at the six-team event.

Brown shot a 72 to earn medalist honors, nine strokes ahead of a trio of 81s, which were recorded by Naperville Central’s Scott Dunsire, Neuqua Valley’s Ian Langton and Metea Valley’s David Lipan.

“He’s like our Rory (McIlroy) right now, very cool,” North coach Ryan Hantak said. “He has obviously played here many times before. He loves it. He’s looking for big things this year. He just played loose. I’m so happy for him. To shoot a 72 out here in these conditions, wow. We’re happy.”

Brown wasn’t among the top 10 with his 75 at Naperbrook in the season-opening Bob Sterr Redhawk Invitational as the three North squads at the meet finished fifth, sixth and seventh.

But Tuesday, Brown turned it around and dominated the field on a much more challenging course in windy conditions. He carded four birdies on the front nine, making the turn with a 34.

“I’ve been hitting the ball great,” Brown said. “I’ve been putting it well, they just haven’t been falling. I don’t think I’ve ever had as many lip-outs as yesterday, so I just came out today and I was just like, ‘You know what, if I can get a couple of putts to drop, I’m hitting the ball great. There’s no reason why I can’t post a solid number.’

“I honestly, in these conditions with this wind, I didn’t think it would be that low, but I’m not complaining.”

“I think any of the top 12 can be in the top six,” Brown said. “If we keep playing like this, who knows what can happen. We’re definitely not one of the favored teams this year, but if we peak at the right time, you never know what might happen.”

Langton’s 81 led a balanced Neuqua attack that saw all six golfers fall within seven strokes of each other. Jimmy Roach scored an 83. Neuqua won the 12-team event Monday at Naperbrook by three strokes over Benet and Downers Grove South.